From Kabul to Baghdad and Back: The U.S. at War in Afghanistan and Iraq 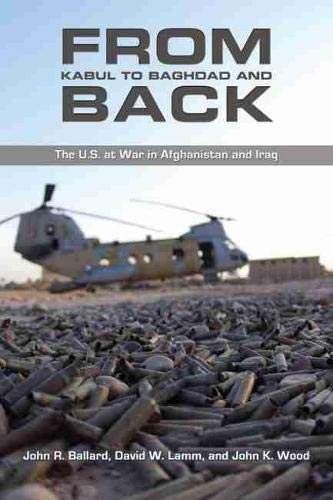 “. . . much would have been different in the Afghanistan war if the Bush administration had not decided to go to war in Iraq at the same time.”

“We have failed in Afghanistan. Failed to define tightly the original mission. Failed to see Afghanistan through its own eyes and through the eyes of its neighbors. And we failed to explain to the American people why we were there and why we need to remain a partner in the region even when the fighting ceases. Now we may be ready to fail in the manner we leave this ‘good war’ that has brought death and destruction not only to the people of Afghanistan but also in neighboring Pakistan. After all, it was our war that spawned the insurgency in that country—an insurgency that will outlast the U.S. presence in the region and add to the costs of war in that benighted land,” insists Shuja Nawaz, director of the South Asia Center at the Atlantic Council in Washington, D.C., in a recent article in U.S. News and World Report.

Have we failed? To what extent?

From Kabul to Baghdad and Back, from the heart of the defense establishment, provides a substantial and thoughtful contribution to our understanding of what happened in Afghanistan and Iraq.

It also provides a harsh, comprehensive critique of U.S. defense policy from just before September 11, 2001 to President Barack Obama’s announcement of U.S. withdrawal from the conflict in Afghanistan on May 1, 2012.

From Kabul to Baghdad and Back is crudely written, but the subject of the narrative carries one through, and the level of documentation and detail is most welcome.

It documents the great heroism of our soldiers and some serious failures in preparation and in thought on the part of the leaders who send them into harm’s way.

A look at the results confirms our worst fears. The most recent report from the International Monetary Fund shows just how little has been accomplished:

“After decades of war, Afghanistan ranks in the bottom 5 percent of countries on the 2011 UN Human Development Index. Unemployment and underemployment are widespread, the poverty rate was 36 percent in 2007/08, and female literacy (ages 15–24) stood at only 22 percent. Key problems include large and active militant groups, poor governance, low levels of human capacity, a massive illicit sector, a large cash based economy, and porous borders. This, combined with the post-2001 surge of military, development, and humanitarian aid has contributed to distorted economic incentives . . . and helped entrench powerful vested interests,” (IMF, First Review, June 19 2012).

Meanwhile, the Obama administration is fixed on its plan to take our troops out. The number of U.S. troops on duty in Afghanistan will be reduced by 30,000 to 68,000 by the end of September 2012.

Problems are arising as Afghani troops trained to defend the regime NATO supports and to work with NATO troops have begun to attack NATO forces. Nearly 50 U.S. soldiers have died as a result of these attacks by soldiers who are supposed to be our allies.

We have achieved at least one thing in Afghanistan: We have created conditions in which China and Russia will be able to take advantage of the power gap that the NATO withdrawal will leave.

Both countries already have forces fighting alongside those of NATO, as a report from the Maldon Institute showed about a year ago. In the middle of September, 2012, Zhou Yongkang, China’s domestic security chief and a member of the ruling Communist Party’s central Politburo, made an unannounced visit to the Afghan capitol and signed an agreement for “security and economic development” with Afghan President Hamid Karzai at his garden palace.

It would be wrong place the blame on the Obama administration alone for this colossal policy failure—although it was impossible to understand President Barack Obama’s message, let alone his victorious tone during his visit to Kabul in May 2012. “The goal I set—to defeat Al-Qaeda and deny it a chance to rebuild—is within reach,” Obama claimed.

Meanwhile Al-Qaeda has killed the U.S. ambassador in Libya, and the Taliban-al Qaeda alliance in Afghanistan has only grown stronger. Surely it was a strange message to try to put over as our troops flee the country.

But again, the Obama administration wasn’t alone in bungling this war. Obama inherited, as the book shows, the real, repeated incompetence that came from the Bush administration. W’s bungling gets traced back to before 9/11, when our then commander-in-chief ignored warnings from the Clinton administration and did little about the Al-Qaeda threat.

As the Bush administration took over, “the transition was a painfully slow process and did not lend focus to counterterrorism or Al-Qaeda issues. Secretary of Defense Donald Rumsfeld testified to the 9/11 Commission that he did not recall receiving any briefings about bin Laden from outgoing secretary William Cohen . . . The position most responsible for counterterrorism issues, the Assistant Secretary of Defense for Special Operations and Low Intensity Conflict, would remain vacant until after 9/11 . . .”

A multiyear plan was circulated with a policy to take action against Al-Qaeda, and it was discussed by the secretary of state and the director of the CIA. A lower-level meeting on the subject was held on six days later, but, “no significant changes to policy, and no updating of the military option had been accomplished since Bush’s inauguration nearly nine months earlier.”

(Remember: On the day before 9/11, President Bush visited a school in Jacksonville, FL, then spent the night at the Colony Beach and Tennis Resort on Longboat Key. On the same day, his then attorney general, John Ashcroft, refused an F.B.I. budget request to add 149 field agents, 200 analysts, and 54 translators to its counterterrorism effort. He did so despite the fact, unearthed by congressional investigators, that the F.B.I. then had only one analyst monitoring Al Qaeda).

After the attack on the World Trade Center, Bush got busy and declared a “war on terrorism” sanctioned by Congress on September 14.

It was known that Al-Qaeda operated out of Afghanistan with the support of the Taliban. George W. Bush is cited in the book as stating that removing Al-Qaeda’s safe haven in Afghanistan was “essential to protecting the American people.”

So Bush sent in first, the CIA, and then Special Forces, and then more troops, and they teamed up with the Afghan Northern Alliance opposing the Taliban, and drove the enemy out of Kabul and Kandahar.

They proved unable to stop bin Laden, nor to neutralize a large part of his forces. Because of the speed with which the U.S. attack was executed, there was considerable conflict among command centers, and the book illustrates in detail.

Having won the initial battle, the U.S. had to confront the issue of stabilizing the country. At this, the U.S. military utterly failed, allowing the Taliban to retake the advantage both politically and militarily in Afghanistan. From Kabul to Baghdad and Back tells the whole bitter tale, step by step, of how this occurred.

The thesis in From Kabul to Baghdad and Back is that much would have been different in the Afghanistan war if the Bush administration had not decided to go to war in Iraq at the same time. There is considerable discussion about what it meant to “go to war on two fronts,” and ultimately the authors blame this for the failure in both countries.

Fortunately, this thesis obliges them to recount the entire Iraq war in detail. It is a shameful and ugly story from the point of view of the military leadership, but the authors spare no details.

It is certainly true, as they try to show, that much of the intelligence and real effort that went into the operations in both countries was wasted as “resource decisions were not kept in order.”

Yet the book cites Professor Joe Collins: “Since 2004, the Taliban has clearly done more to regain its lost status than the coalition has done to advance its objectives. Among the key strengths possessed by the Taliban are a few thousand dedicated cadres, excellent funding from the drug trade and Persian Gulf charities, and the luxury of an unimpeded sanctuary in a neighboring country.”

And none of that has changed since that was written in 2009. It is difficult to see why our war effort has been unable to change any of these “strengths,” but it hasn’t affected them at all.

The result will be an enormous economic advantage handed to China and Russia, while we struggle under the debt burden caused by the war. At least From Kabul to Baghdad and Back enables us to learn how we got here.