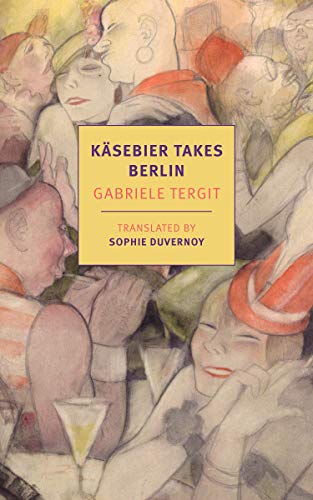 There are iconic literary works which, in addition to their storytelling power, are unforgettable for evoking a time and a place. Jane Austen’s oeuvre immediately come to mind, as do the novels and short stories of Edith Wharton. Käsebier Takes Berlin by Gabriele Tergit is a worthy addition to this pantheon.

There is an aura to Tergit’s prose, and to this tale, that is transporting. Readers who allow themselves to be completely absorbed by this book, and that is not a hard thing to be, may find themselves surprised when they walk out into their world and their world is not Berlin in 1930.

And while its story is specific to that epoch and that location, Käsebier Takes Berlin explores a universal theme, one that is more urgent now than ever: the role of a free, and threatened, press in a fragile democratic society.

Author Gabriele Tergit (the pen name of Elise Reifenberg née Hirschmann) was born in Berlin in 1894 and died in London in 1982. She belonged to a family of successful German Jewish industrialists. Tergit was a familiar journalistic voice in Germany via her courtroom reporting for the Berliner Tageblatt. Released in 1932, Käsebier Takes Berlin made her famous. It also brought her to the attention of the Nazis. In 1933, she fled Germany for Palestine, ultimately settling in the U.K.

This new edition of Käsebier Takes Berlin is rendered in a marvelously quirky translation by Sophie Duvernoy. Indeed, Duvernoy’s introduction to Tergit’s novel is not to be missed. Duvernoy sketches a compelling image of Tergit’s life and times and of the milieu of Käsebier’s story. Duvernoy also explains her process of translating a piece that includes contemporary references and a specific German dialect: “This translation attempts to convey the zip of Berlinerisch by using a combination of Anglo-American language of the era, everyday slang, and dropped consonants in colloquial speech.”

In addition to the hapless title character (whose name translates to “cheese beer”), the other inhabitants of this story are legion; readers might wish for a flow chart similar to the ones that accompany editions of War and Peace.

Käsebier Takes Berlin takes place during the final years of the Weimar Republic. Unlike the characters, who may suspect but do not have the benefit (or curse) of hindsight, readers know what followed that brief gasp of democracy in Germany’s history.

Tergit’s story begins with images of a Berlin in dissipation. Things are looking bad in the Reichstag. The government may be collapsing. The forces of the political right are on the rise.

In this uncertain world, the journalists are trying to fill the next edition of their newspapers. An acquaintance of an editor tells him about a “popular cabaret: supposed to be a great singer there . . .”

Enter Georg Käsebier. Tergit sprinkles her tale of this singer’s rise and fall with amusing chapter titles, including the heading for Chapter 5: “A long chapter, at the end of which Käsebier is written up in the Berliner Tageszeitung.”

Even during those passages in the novel when there isn’t much in the way of actual events, the sense of the people and the era is highly involving and often hilariously dark. One of the writers prepares an expense report: “One murder investigated = 9 marks. Car to corpse = 3 marks. Car back from corpse = 3 marks. Several glasses of schnapps, due to nausea upon viewing corpse = 3 marks.”

There are at times long sections of uninterrupted dialogue between the characters, which reads like a screenplay and works surprisingly well in the novel form. At other times, Tergit devotes lush paragraphs to describing Berlin—its buildings, streets, cafes, people, parties, “the air scented with freedom, brashness, and benzene,” the “Kapitol lit up in pink, purple, and red.”

While Käsebier is the focus of the story, he is often a secondary figure to the journalists who seek to benefit from his fame, and to the builders and businessmen who seek to exploit him.

One of the characters gets a contract to write a book about Käsebier. He produces the manuscript in one day. And this is before computers. Other characters are looking to build a complex which includes a Käsebier theater, which seems like a sure bet for success, given the cost of housing in the city and the fact that Käsebier’s first show is sold out and he’s already gotten a record deal.

Still others are producing a Käsebier doll “that could be wound up to sing ‘How Can He Sleep with That Thin Wall?,’” one of Käsebier’s greatest hits, along with “Boy, Isn’t Love Swell?” and “In Tent Two, by the Spree, Over a Cup of Coffee, That’s Where I Kissed Lieschen for the First Time.”

It may be assumed that Elton John and Bernie Taupin are relieved that they didn’t have to compete with timeless classics like those in the real world.

The building of the new complex is sure to be a huge success and a monetary windfall. Until it isn’t. Where there had once been no apartments available for years in Berlin, assuring via the laws of supply and demand that any new inventory would be snapped up, suddenly there are empty apartments all over town, and renters can be choosy.

Bankruptcy looms for many of the characters. Anti-Semitism is a constant. The specter of fascism is becoming impossible to ignore. In the midst of this trauma, Käsebier returns to Berlin. His show in London was a complete flop. “[T]he Käsebier economy was over for good.”

Journalists are fired from jobs they’ve had for decades; suicides and heart attacks follow. There are complaints by characters about having to combat “fake news.” Other characters are swindled by an investor and have to sell their lifetimes of treasures, all of the inventory categorized in detail by Tergit, along with a festive description of the atmosphere at the auction. “And then everything was gone.”

Käsebier’s story ends with him singing at a pub in a small town near the Polish border. One can only hope that his return to obscurity may save him from the coming storms.

As a bookend to the excellent introduction, translator Duvernoy’s endnotes to Käsebier Takes Berlin are equally worthy of a reader’s complete attention. Offering a history lesson and a literary guideline, they, too, are not to be missed, as is this exceptional novel.