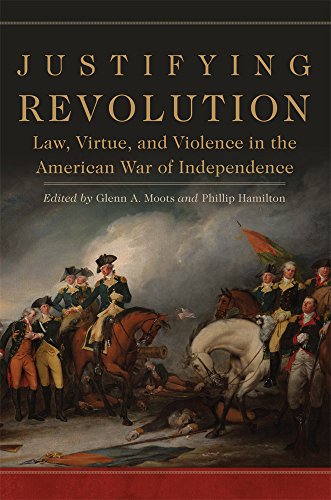 “thought provoking exploration of the legal and moral roots of the rebellion that created our country . . . a timely and fascinating book.”

The American Revolution has inspired a number of recent popular and scholarly works that bring to light less examined aspects of this long conflict that gave birth to America. This is one of those volumes, a collection of essays by leading historians, political scientists, and lawyers that explores a seldom considered question of our founding revolution: Was it justified under English common law?  Was it justified by contemporary understanding of the laws of war? Was the war waged according to moral and legal boundaries in existence at the time?

Nearly all of the essays reference the works of Hugo Grotius, a 17th century Dutch humanist who pioneered the concept of just war as an extension of natural rights, and Emer de Vattel, an 18th century Swiss legal theorist who expanded many of Grotius’s themes to write one of the first treatises regarding just war theory. ‘

Both of these men were heavily influenced by the Enlightenment while incorporating ideas from St. Augustine, St. Thomas Aquinas, and various medieval thoughts on the conduct of war. Although it remains unclear whether any of the British or American generals or politicians actually read either man’s discourses, their reasoning and logic certainly would have been familiar to decision makers on both sides.

As modern Americans, we naturally assume that right was on the side of the colonists when the first shots were fired at Lexington and Concord. But in the first of three major themes explored—jus ad bellum—justice in going to war, the essays make the case that this reasoning was not so clear cut.

Both Grotius and Vattel believed in the citizenry maintaining loyalty to the sovereign ruler except in extreme circumstances, and both men also believed that rulers had wide latitude to suppress insurrection and rebellion. These essays note that prominent Patriots went to great lengths to justify declaring independence from the king, not only to win over their own reluctant countrymen, but gain support from English politicians. While few Englishmen accepted the colonists’ arguments, Patriot leaders were at least able to establish a fairly clear set of principles, articulated most clearly in the Declaration of Independence, for why they felt the king and Parliament had forfeited their right to rule the colonies.

After debating the legal, moral, and ethical issues over whether the colonists had a right to rebel against King George III and Parliament and how much force the British could use to quell the insurrection, the second section explores—jus in bello—justice in conducting war and these essays discuss many previously neglected avenues like the violence against civilians, both Loyalist and Patriot, the overall conduct of the soldiers in combat, and crimes against civilians and civilian property.

One particularly well-done essay in this section explores the legal issue of imposing martial law in Boston during the critical winter of 1774–1775 when the British might have had a small chance of stopping the rising tide of insurrection.  But General Thomas Gage, the British governor-general of Massachusetts, hesitated to unilaterally use his soldiers for law enforcement, observing the legal boundaries of British law, and perhaps missed the final moment Britain might have avoided Lexington and Concord by taking swift punitive action.

The final section, jus post bellum, or justice after war, looks at the ending of the war and explores themes of conflict termination and peace making. Although the book’s editors point out that conflict termination as a political science or legal matter was not formally understood or studied in the 18th century, the need for making an equitable and workable peace after war, especially one so bitter and prolonged as the Revolution, was well understood by the politician and negotiators in 1782–1783.

Britain, of course, had the most difficult challenge with ending the war. Both the administration of Lord North and King George III were determined to suppress the rebellion and it was only the entrance of France and Spain into the war and the potential for even greater imperial losses that forced Britain to the peace table. However, once this decision was made, both sides began a realpolitik view of the final peace treaty, as both countries were eager to renew commercial ties.

All of these essays were thought provoking as they explore legal and moral roots of the rebellion that created our country. For students of the colonial period, the American Revolution, or the law of war, this is a timely and fascinating book.