Justice Society of America: A Celebration of 75 Years 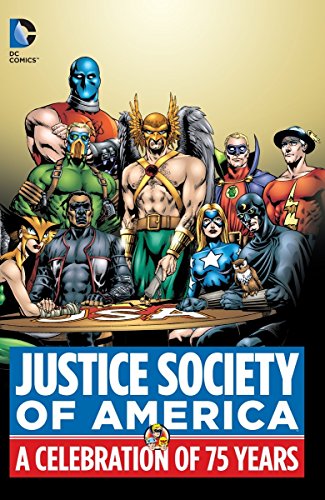 Think of any team in the comic universe and they undoubtedly owe a debt of gratitude and inspiration to The Justice Society of America. While the idea of having comic book heroes meet and team-up seems obvious today, it was an unknown concept until The JSA arrived. Without The JSA we would have radically different versions of The Avengers, X-Men, Teen Titans, and The Fantastic Four.

Despite their social and historical importance, the team still flies far under the radar when it comes to name recognition in the general public. Magazines such as Entertainment Weekly or Hollywood Reporter will gladly put the Justice League of America on their cover, but the articles inside seldom contain even a shout-out to the original gathering of heroes.

Justice Society of America: A Celebration of 75 Years gathers 17 memorable stories across nearly 500 pages of four-color brilliance. The stories in this anthology move from 1941 and across the Golden, Silver, and Bronze ages of comics straight into the 21st century with a new story from DC Comics modern day take on Earth-Two.

This is an All-Star celebration of classic comic characters and team-work. The names come straight from the Hall of Fame. Superman, Batman, Wonder Woman, Green Lantern, Flash, Hawkman, The Atom, Dr. Fate, The Spectre, The Sandman, Black Canary, Green Arrow, Huntress, Wildcat, Power Girl, Hour-Man, and others are all featured in various combinations.

As each story unfolds we see an industry as well as an American art form change and adapt with the times. The first story in this anthology, America and Democracy (All-Star Comics #4 Mar-Apr, 1941) brings the original members together to fight for democracy against the developing Axis threat. The lines of battle are clearly drawn and the villains are very direct in their evil.

By 1950 the team has drifted from global conflict into the realm of science fiction. The Man Who Conquered the Solar System (All-Star Comics #55 Oct-Nov 1950) is an indicator of the changes to come.

The Sixties find America, as well as the world, pre-occupied with the space race. The Silver Age tales reprinted in this celebration find the JSA teaming up with their then modern day counterparts, The Justice League of America, to fight dimensional threats that drift into outer space.

In keeping with the feel of the sixties, the stories grow to become cosmic. The JSA fight across space, time and multiple dimensions. The concept of a parallel Earth comes into play as a way to explain how so many heroes could exist on multiple planes.

The eighties saw a company-wide restructuring of the DC Universe. This led to editor and writer Roy Thomas solving the problem of continuity by creating the All-Star Squadron. The two stories included in this compilation showcase the brilliance of Thomas’ vision.

Effectively a brand new version of the JSA, Thomas was able to incorporate both old and new heroes into a team that fought the good fight in World War Two, and yet still worked perfectly in then-modern continuity. He was aided by art and inks from Jerry Ordway, George Pérez, Arvel Jones, Dick Giordano, and others.

Following the All-Star Squadron the original JSA return in style in stories by Len Strazewski, James Robinson, Geoff Johns, David Goyer with art from William Rosado, Alex Ross, and others.

The final story finds the modern, Earth-Two Hawkgirl, Green Lantern, and Flash trying to deal with terrorism as someone has fired nuclear warheads against the nation’s capitol.

As written by James Robinson with pencils by Nicola Scott and inks by Trevor Scott, the team reflects the modern world in the way the original team showcased a country preparing for war in 1940.

The JSA is the first significant gathering of heroes united for a common cause. Think about this. In mythology the Gods of Ancient Greece and Rome never really teamed up. They kind of knew about each other, but Cronos gobbling his offspring can hardly be called a team activity.

In literature, the Knights of the Round Table worked separately. Over in pulps, the predecessors to comic books, The Shadow, Operator #5, Doc Savage, and others all had teams that surrounded them, but the books were anchored by individuals. It was in a comic book that the idea of a team-up came together.

The number of credible new heroes that appeared on newsstands in the wake of Superman and Batman’s success saw the creation of a good number of new, costumed heroes. Which gave rise to the question, how on earth can so many heroes exist and yet not know of each other?

The cover of All-Story #3 (December 1940) answered that question easily. It featured Green Lantern, Flash, Hawkman, The Atom, Dr. Fate, The Spectre, The Sandman, and Hour-Man sitting around a round-table. Their presence leads to another inevitable question, where are Superman and Batman?

The decision to leave the big two out of the JSA is purely editorial. In creating the JSA the editors of DC and All- American Comics decided to take four heroes from each company that lacked their own title and use an existing anthology to give the second-tier characters more exposure.

From that simple idea we now have newsstands and cinemas filled with teams of costumed heroes who thrill fans with fights, wit, battles, bravery and mystery.

The JSA is the World’s Fair of all comic books.