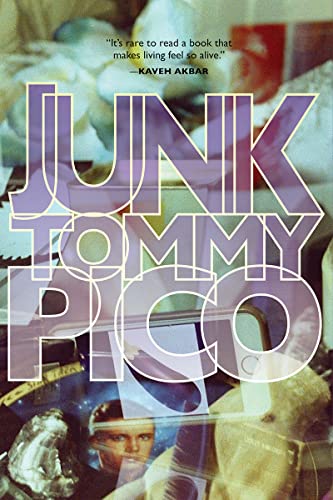 “Tommy Pico brings his unique personal perspective to this volume. He explores, once again, what it is to be Native American and gay in the United States at that weird moment in history prior to the pandemic.”

Junk, the third installment of Tommy Pico’s Teebs trilogy, is a book-length break-up poem. Written in long couplets, it is Mr. Pico’s meditation on relationships, consumption, and compulsion. It opens with the author

In his inimitable style, Pico fuses (and confuses) thoughtful explorations of raw emotion and references to pop. “My aura is strawberry shortcake dessert / bar and the popular American corn snack Funyuns My safe word is Go to hell Katy Perry.” In live performance Pico’s stage presence combines the joyous karaoke bar funster, dishing social media fanatic, and polymath public intellectual. Insightful commentary on ecological devastation can turn into raw emotional confessions and then one-liners straight out of a Comedy Central Roast. These ideas, references, and images whipsaw one after another with precision and timing. The enjoyment comes from this disorientation and tonal whiplash.

Junk’s most obvious predecessor is Garbage by A. R. Ammons. Published in 1983, it is also a book-length meditation written in couplets and brimming with verbal excess. Pico’s work can be seen as a parody, an homage, and a rebellion to Ammons’ work. His last work, Nature Poem, was a rumination on the stereotypes involving Native Americans and their alleged closer connection to nature. Yet his constant refrain throughout the work was “this is not a nature poem.” Junk honors the legacy of Garbage, but it is also punctuated with lowbrow humor, self-deprecation, and hot takes.

theft, and genocide are its founding institutions Buy me a donut[.]”

Interlaced throughout is Pico’s contemplation of what “Junk” is: “Junk gets a bad rap because capitalism Junk isn’t /garbage It’s not outlived its purpose—Junk awaits its next life.” Earlier he speaks of how “it’s hard to imagine zippers do / much else but reveal yr Junk.” Then he declares “Junk: a relief map of yr traumas.” Junk becomes a polysemic entity, a thing with multiple meanings. He uses these meanings as jumping off points or he’ll smash them together, the sexual with the material, the biographical with the environmental.

Because of his Native American ancestry, Pico considers himself junk, but his existential despair competes with the very American, very capitalist desire for conspicuous consumption. It becomes metamorphosed into gross bodily functions like eating and having sex. He plays up on this tension between the gross (materialist, biological) and the personal disgust (ew, gross!). “Ever bought a / McFlurry n shouted YR DEAD INSIDE but yew were pointing a / finger at yrself and, horrified, yew screamed[.]” He finds a way to bring together comedy, tragedy, history, and biography into a few lines.

Junk races forward, the language and emotions pulling it with increasing momentum. It is a poem as page-turner studded with pop culture references. The energy is inescapable, unimpeded by conventional punctuation. It possesses the characteristics of precisely calibrated expression and an off-the-cuff stream-of-consciousness, bringing the poetry back to its fundamental spokenness. Tommy Pico brings his unique personal perspective to this volume. He explores, once again, what it is to be Native American and gay in the United States at that weird moment in history prior to the pandemic.