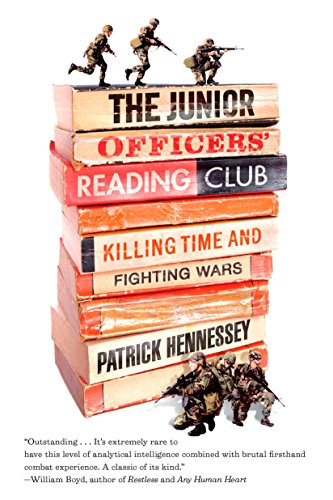 This novel is a real-time, disturbing blitzkreig. It is also an important, exhausting, and challenging book about our army during today’s conflicts in Iraq and Afghanistan.

The conscription wars are over, and the professional soldier is trained to a different pitch. The twenty-first century has created the robo-cop soldier living and dying, intact and damaged, in a world none of us really know—not the politicians, not the media, not the families at home. That’s this book: music hammering in the background, bullets hitting armor, sudden ambushes, instant silences, and boredom—an alien, concentrated world. Hennessey brings this wartime existence to life with a particularly subjective perspective.

The Junior Officers’ Reading Club is a vital and disturbing piece of writing. It reads like the account of a trauma. Hennessey’s Afghanistan tour takes us into a maelstrom with a momentum that blows the mind. His overarching question? “Why am I here?”

Part of his answer is the adrenalin kick of being incorporated into the chaotic and unpredictable rush of an unfolding skirmish and ground battle. He nearly fetishizes the bellow of the jets, the crashing of mortars rumbling off armor, the chaos of bombs and rockets, and the need to surge ahead despite all of it. Here, the inner mind is the protagonist at war.

The action is kaleidoscopic. It’s a book of contingencies, flashes, and flashbacks. The Junior Officers’ Reading Club covers journalists as well, those who turn up “worried” under fire, some writing rubbish—all amid donkeys relaxing sedately in a field of fire, mixing in with the allied Afghan National Army figures, who appear at once nonchalant and fierce.

We witness broad strategies crumbling on the edge of tactical emergencies. Amid the action the narrator withdraws into reflection. But he is torn out of it by a sudden attack, the subsequent stench of blood and guts, bits of masonry and dead goat falling from the sky. What is he to do about the futile, stubborn advance of an enemy he does not hate?

The Junior Officers’ Reading Club is a tense and action-packed account moving at top speed through a love-hate relationship with fighting. Is it a yarn about the killing game. And what about escape from this place?

Home is a burden for the returning vet, his mind still filled with the awesome awfulness of the experience. The Junior Officers’ Reading Club should be read by by all of us who don’t and won’t and can’t know a world like it, but whose lives are secured by these soldiers’ efforts and sacrifices.

This book is highly recommended. And will there be a sequel? One feels as if the writing ought to go on.