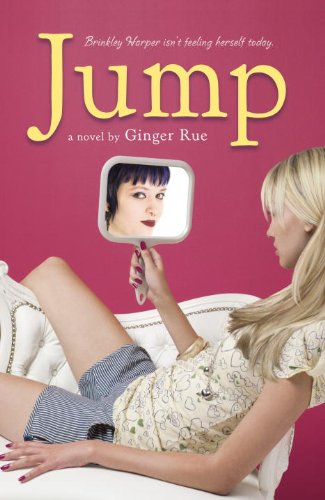 Almost everyone can relate to be being bullied or teased mercilessly in school at some point. At Story High, the bully is Brinkley Harper. That’s right: gorgeous, blonde cheerleader Brinkley Harper is a bully. Popular, fashionable, and the ultimate “It” girl, she strikes fear into the heart of almost every other girl and has left a trail of despair in her wake as she makes her way toward graduation.

Brinkley’s path of destruction has led her to therapy, where she must work through her issues and her treatment of certain fellow classmates or face expulsion. In Brinkley’s world, anything less than perfect is not acceptable. And then her therapy turns out to be a little more than she bargained for.

In Ginger Rue’s latest young adult novel, the subject of girl-on-girl bullying takes center stage with an unusual twist. What if the bully literally became the bullied? Like a modern-day teenager from Freaky Friday, Brinkley Harper begins to learn about what impact she has made in the lives of those she wrecked when she wakes up in their bodies.

How does it feel be treated like Miranda, who hangs with the Goth crowd? What about overweight Carly trying desperately to lose weight? Or the overly nice Emma? Maybe the shy Korean exchange student? Or what about the once highly popular now fallen from grace, Ivy? Through their eyes Brinkley begins to see herself for who she really is. Will Brinkley truly like what is reflected back to her? Will it even matter to someone as selfish and conceited as she?

While Brinkley is the perfect villain, she is also just enough of a sympathetic character to keep readers engaged and involved with her story and the stories of those in her life.

Jump comes across as a fresh idea from a writer with a keen eye for characterization and the vicissitudes of the high school scene.

While Jump may be a little too quickly wrapped up in the end, the book still reveals valuable truths about high school bullying among teen girls. It’s a great fictional addition to literature on the topic, which is also gaining more exposure in schools and books for younger children. Jump will engage teens with its trendy take on popular culture, but it may also invite a change in the their perspective.