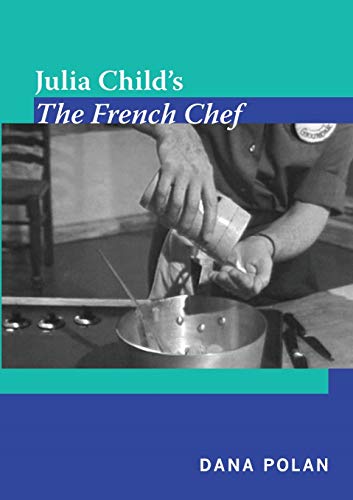 “a history of early American television telescoped through the persona and history of Julia Child. . . . fascinating . . .”

When you walk the streets of Cambridge, Massachusetts, you can’t miss the lingering traces of heroes and history. From the names of the men who brought you the Boston Tea Party to the dead in the Old Burying Ground near Harvard Square, the past perfumes the air.

Julia Child’s original kitchen may now reside at the Smithsonian in Washington, D.C., but her old house at 103 Irving Street still draws the faithful who remember her culinary prowess on one of the most successful food television shows ever produced, “The French Chef.” Her picture pops up everywhere, in bookstores and bed-and-breakfast dining rooms and libraries. Like the Boston Celtics, Julia belongs to Boston.

And it was a small Boston television station, WGBH, that took a big gamble and made Julia Child a star with “The French Chef,” which ran on public television from 1963 through 1973.

You will find Mr. Polan’s work fascinating, but keep in mind that it is geared toward a more academic audience than a popular one.

As Mr. Polan makes clear, there were cooking shows on American television prior to “The French Chef,” but Julia Child brought something new to the table, so to speak. Before WGBH launched Julia onto the national scene, cooking shows appeared locally, often presented by women with home economics degrees, like Florence Hanford. The American culinary icon James Beard also tried his hand at television, as did Dione Lucas, Julia’s most prominent and well-known predecessor.

Mr. Polan explains how these shows set the stage for Julia, so that her “good effective pedagogy” and her personality enabled her and her show to reach countless Americans who had never cooked before, from children to men who rarely stepped foot in the kitchen unless they were topping up their gin and tonics.

Unlike some of the previous cooking shows on television, “The French Chef” went beyond mere cooking and incorporated material on ingredients and the history of recipes, including asides on the historical figures responsible for the whole culinary genre in the first place. As author Polan says, “In its own way, “‘The French Chef’ prepares the way for later, more hedonistic cooking shows, such as Nigella Lawson’s ‘Nigella Bites.’ . . .”

Unique at the time, “‘The French Chef,’ then, offered [viewers] suspense and drama, comedy and ribald physicality, mayhem mixed with professionalism.” Mr. Polan makes it clear that this pioneering television show belongs not only to the field of American culinary history, but also to the history of television, an increasingly powerful medium that eventually impacted the lives of Americans in ways still not fully understood.

That is where Mr. Polan’s major contribution comes in this highly academic book. He examines the production details of “The French Chef.” The endless planning and designing carried out by Julia Child and her husband Paul, who spent hours drawing minute plans of the kitchen counters, ensured that Julia would know exactly where everything was during every moment of the 30-minute segments filmed live. This material also allows Mr. Polan to theorize how television programming evolved and camera work changed. The WGBH cameramen began to experiment with new ways of filming, another aspect that elevated Julia’s show over the others and influenced future filming.

At a time of great social upheaval, Julia Child’s “The French Chef” made French cuisine accessible to people in a way that they did not feel threatened by contemplating a change in their habits. Americans associated French cuisine with hoity-toity restaurants and special occasions. As Mr. Polan says, the show played into the desire for socially upward mobility and showed viewers that cooking and eating could be pleasure experiences in their own right.

Julia Child focused on the gadgets and gizmos that made cooking easier and didn’t turn her nose up, either, at certain ingredients like ready-made stock, all of which speaks of the profound changes going on in America at the time. Mass industrialization of food and the incipient women’s liberation movement collided with the Civil Rights movement and the Vietnam War.

Mr. Polan’s analysis of “The French Chef,” and the role it played in American culinary and television history, drowns at times in too much detail, especially in passages dealing with how WGBH produced the show. A more in-depth discussion of Julia’s non-television predecessors would have been useful. Luckily, such information can be found in Setting the Table for Julia Child: Gourmet Dining in America, 1934–1961 (2011) by David Strauss.

Yet in spite of the periodic inclusion of excessive detail and the constant annoying use of “pedagogy,” Mr. Polan’s meticulous work in Julia Child’s “The French Chef” contributes much to the growing literature on American food history. To get the most out of it, first watch several episodes of “The French Chef.”