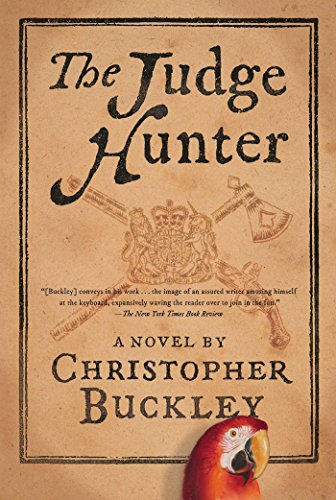 In these days of nasty name-calling passing as humor there is thankfully one true practitioner of the literary art of satire still standing, and Christopher Buckley’s second historical novel proves it. The Judge Hunter is full of humor that skewers historical figures in all their self-serving political ambitions—after all, satire is mostly political—and reveals the New World and the Old World with all their faults and pretensions laid bare.

London, 1664, 15 years after the Restoration of the monarchy in the person of Charles the Second, and the country is enjoying the social restoration of such events as the celebration of Christmas; the re-opening of the theaters; the return of bear baiting, cock fighting, gambling dens; and so forth, all of which had been banned under Cromwell and his Puritans.

Samuel Pepys, Clerk of the Acts of the Royal Navy, but better known to history as Samuel Pepys the Diarist, who chronicled the Restoration period from 1660 to 1669 in his own secret shorthand, it not being politically wise to say what one really observed and thought in plain English anyone can read, and Pepys is an astute politician.

He is also the brother-in-law to Balthasar de St. Michel, beloved brother of his wife, a relationship he finds taxing. “His rise within the Navy Office had barely kept pace with the proliferation of impoverished relatives.”

Balthasar, “Balty,” is one of those impoverished relatives, mostly through his own fault. “At 24, Balthasar could claim no achievements, nor was there any indication of ones to come. The word feckless might have been coined to describe Balty.

Since Pepys’s wife, Elizabeth dotes on Balty, and will not allow a word said against him, “it fell to Sam, again and again, to provide money and employment for his pointless, impecunious brother-in-law.”

This time fortune smiles on Sam as Lord Downing needs a royal commissioner to search for two of the judges who signed the warrant authorizing a meeting between King Charles the First and a sharp blade. Charles II still takes exception to his father’s execution, and has sworn to hunt down and execute these regicides

Since the two regicides, Edward Whalley and his son-in-law, William Goffe, are believed to have fled to the New World, somewhere in New England to be precise, His Majesty and Lord Downing require a commissioner to travel to the New World to find them. Pepys suggests Balty, and to his surprise Lord Downing so appoints the useless young man.

“Pepys deciphered this as Downing thinking it would gall the New Haveners even more to be bossed about by nincompoop.”

Balty is very unsure about the appointment, as New England is across the ocean from London, and Balty has a predilection to sea sickness. Also, there is the matter of the savages, but Pepys assures him that “All that’s in the past. There was a bit of unpleasantness at the outset, but the savages have been entirely domesticated.”

Lord Downing sends a letter with Balty to give to his agent in Boston who will serve as Balty’s aide de camp. All seems well, but Pepys feels some guilt as sending the young man to the New World, but reassures himself that Balty “should be up to the task of making Puritans yank out their hair . . .”

Only after Balty has taken ship for the New World does Papys discovers that Downing is using the young man as a distraction while Richard Nicholls sails his fleet of four Man of Wars into New Amsterdam to take possession of the Dutch colony for England. This is the worst possible news to Papys since he knows the English navy is woefully unprepared for a war with Holland.

In the meantime Balty meets Downing’s agent, Hiriam Huncks, who is a very mysterious man not very forthcoming about his past or exactly what he does for Lord Downing. Huncks and Balty leave Boston for the Connecticut Colony and a meeting with its governor, John Winthrop (the Younger), more of a free thinker than his father. Connecticut Colony now includes New Haven where the regicides may be hiding.

Balty’s meeting with the Reverent John Davenport, Puritan leader at New Haven, does not go well, and his attendance at Davenport’s Sunday sermon goes less well. A Quaker woman (a very beautiful Quaker woman if one ignores the scars of a previous flogging) marches into the church totally nude.

She is arrested, tried, and sentenced to be whipped through all the surrounding towns, which of course would kill her. Baltys intercedes, claiming she has information about the regicides, and thus is in his custody. This infuriates the Puritans.

From Thankful’s rescue to the capture of New Amsterdam, Balty fines himself in one predicament after another, a few as a result of his own endeavors and others because the Puritans are hiding the regicides and Balty is a thorn in their sides.

Buckley’s humorous satire of English perfidy in starting another war with the Dutch, to the portrait of the dour and intolerant Puritans of New Haven, and the interaction between the local Indians (more perfidy) and the English settlers is both revealing of painful truths and the timelessness of bad human behavior.

As to the extent that The Judge Hunter is a satirical reflection of current political behavior, one must read, reflect, and make up one’s own mind. One can search for such parallels, or just enjoy a good story based on irreverent American and English history. One may do both if you have the energy for it.