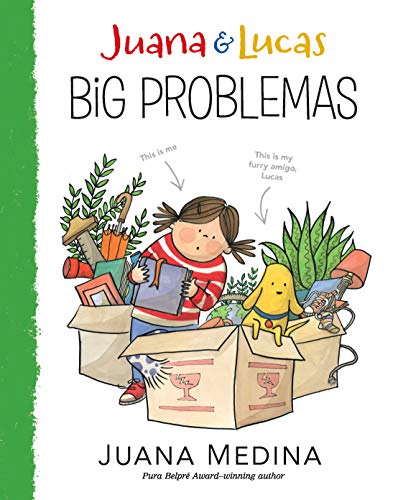 “An engaging story with endearing characters and a gentle touch on the larger themes of loss and change make for a valuable read.”

In Big Problemas, written and illustrated by Juana Medina, Juana and Lucas return in a second romp through the world of this delightful young Colombian and her dog, Lucas.

Juana’s life is just about perfect—but it’s about to become just a little less perfect. Her first clue is that her mami has a new hairdo. At first Juana thinks she’s just gotten into the wrong car after school, but when Juana tells her mami that she liked her mami’s old hair better, her mami isn’t too happy about her comment. “That’s when I knew I was in the right car with the right Mami, just not with the right hairdo.” And that’s when the reader realizes that this is going to be fun.

It turns out the new hairdo is only the first change. Mami wears more perfume, sings more canciones, and wears more lipstick. Juana soon discovers all these changes mean that Mami has a new friend, which makes Juana’s life definitely less than perfect. Impending change leaves that impression on a child.

Mami marries her new friend, Luis, but not before Juana endures the trauma of adjusting to this new relationship. That includes spending more time with everyone but Mami, packing up all her possessions for a big move, and “standing still like an estatua for hours wearing only [her] underwear” so she can get measured for a dress for the wedding—even though Juana isn’t the one to get married. Lucas gets a special bow tie for the occasion, although Juana is pretty sure he won’t be too happy about it. In the middle of it all, Juana wonders what life would have been like if her father were still alive. She’s sad that she never knew her father. The reflective interlude is small, but it adds a nice depth to a story that could otherwise be too light.

The reader is drawn into Juana’s world through topics that are also asides—why Juana’s life is just about perfect, the strange questions adults ask, or how to make ajiaco soup. For the adult reader, these are clever, informative detours. For the younger reader who is just learning to navigate more involved text and storylines, these can be confusing interruptions. The numerous font changes (some quite small!) and the added information pages come as a surprise and create a nonlinear reading experience.

Again, it’s pure delight for a sophisticated reader, especially one who knows a smattering of Spanish. For a younger reader, the mix can be overwhelming. Medina has done a masterful job with giving context clues, but given the amount of text and the abundance of illustrations, at first glance, one would assume the book is geared for a younger reading audience than what the text actually requires.

A real plus is that Medina turns out to be one of those gifted people who can write and illustrate. Her playful drawings are simple and clean and nicely capture the emotions of the moment. Kids will connect to the colors and the sheer joy they convey.

One small nit is that even with the many Spanish words and the occasional Colombian cultural references, the story could just as easily have taken place in Illinois. The reader doesn’t really learn about Colombia beyond a bit of Spanish. If the point is that life is the same in Colombia and Illinois, then it’s well done. Otherwise, it’s a missed opportunity.

In spite of the text challenges for early readers, this engaging story with endearing characters and a gentle touch on the larger themes of loss and change make for a valuable read.