The Joyful Vegan: How to Stay Vegan in a World That Wants You to Eat Meat, Dairy, and Eggs 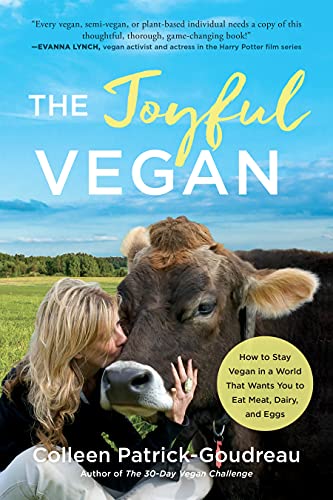 “Colleen Patrick-Goudreau never preaches and straddles the fine line between telling the reader what to do and offering practical suggestions, ideas, and examples.”

Veganism is more than just giving up meat, dairy, and other animal products; it is a way of living in harmony with all creatures. But conveying and living this important message can be a daunting task, and that’s where Colleen Patrick-Goudreau’s new book comes in. The prolific author of many popular books on vegan lifestyle, including The 30-Day Vegan Challenge, has put together a roadmap for those who want to stay vegan. The book, The Joyful Vegan: How to Stay Vegan in a World that Wants You to Eat Meat, Dairy, and Eggs, is a well-written guide for new and seasoned vegans. According to Patrick-Goudreau, becoming and staying vegan is a compassionate journey with no timeline or specific destination.

Patrick-Goudreau’s own journey began in childhood. She was raised in an Irish American family eating typical American fare: “pretty much anything that came from an animal that had once walked, swum or flown.”

Like most children she cared about animals. “I don’t believe you have to love animals to not want to hurt them, but I did (and do) adore animals. I’ve never had a fear of them, and I shed tears at the slightest hint of them suffering at all—in real life or in books, television shows or movies.”

Patrick-Goudreau believes the relationship we have with animals as children shapes who we become as adults and reflects who we are as human beings. But being taught that animals were valuable only for their tender flesh dampened Patrick-Goudreau’s “fierce, unconditional compassion . . . [and] began to dull, as my taste for animal flesh, fat, and fluids began to grow and settle into my palate.”

At the age of 20, she read Diet for a New America by John Robbins and her life changed forever. She calls this her personal awakening from “willful blindness.” This is a legal term and best describes a person who is willfully blind and has chosen not to know. She also wrestled with the word “becoming.” How does one become a vegan? This book addresses this very real dilemma.

The book is divided into two sections: Section One is on Becoming Vegan and Section Two is devoted to Staying Vegan.

As Patrick-Goudreau puts it “when I became vegan, my deepest ethics became reflected in my daily choices, and the process was as natural and effortless as is the process for a caterpillar becoming a butterfly or a seed becoming a flower.”

In the Awakening chapter, Patrick-Goudreau writes about an epiphany that changes everything.

“The trigger for this wake-up call is different for everyone. It can be emotional or cognitive, physical or spiritual, a deliberate journey or an unexpected surprise, but ultimately something happens that challenges our beliefs, shifts our perceptions, and compels us to change our behavior.”

This chapter contains many anecdotal references and stories from her readers and listeners of her popular podcast. The conclusion Patrick-Goudreau reaches is that being vegan is more of a journey than just a specific destination.

The rest of the book is devoted to helping the reader stay vegan. She has divided this part of the vegan journey into ten stages. The first stage begins with Bearing Witness and includes advice on compassion fatigue, self-care, and the voracious consumption of information. This is first baby step in the journey. Along the way the new (or experienced) vegan will have to find inner peace and self-forgiveness on their newfound path to veganism. Being a vegan is a deep responsibility, and Patrick-Goudreau urges everyone to learn the difference between enthusiasm and zealotry and this is crucial in helping dispel the stereotypes of the Angry Vegan (Stage Five).

Patrick-Goudreau never preaches and straddles the fine line between telling the reader what to do and offering personal suggestions, ideas, and examples. From finding a sense of belonging (or tribe) to learning how to talk to non-vegans are part of this journey. Each stage is explained, some with extensive footnotes and Patrick-Goudreau gently, but firmly, encourages the reader to stretch their own comfort zones and fight to become an advocate. She suggests practicing “active listening.”

“One of the ways active listening can be beneficial, especially when we encounter what may seem like absurd or illogical questions, is as a way to understand what’s really being asked underneath what appears on the surface.”

The author’s gentle tone is evident in all the pages. “We can speak up for animals without speaking down to humans.”

As the vegan and the reader go through the ten stages outlined in the book, they will finally arrive at a “new normal.” In this stage, “We feel grateful rather than entitled, and we embrace the lifestyle we have chosen: aspiring to live with integrity and compassion, knowing that every decision we make is done with the intention of not contributing to the suffering and exploitation of human and nonhuman animals and of not causing harm to ourselves.”

Patrick-Goudreau concludes that veganism is not limiting but rather the choices we make are liberating. The book is chockful of information, footnotes, and reference materials. Any vegan who is overwhelmed at some point by this lifestyle will find comfort in the useful suggestions outlined in this gentle book.