Joy: And 52 Other Very Short Stories 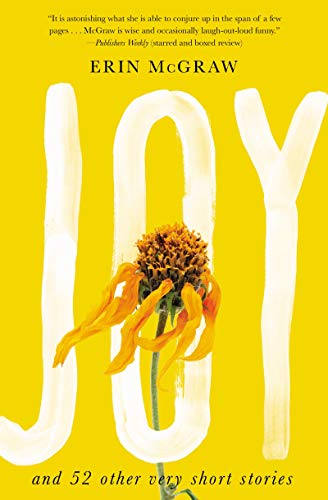 “full of compulsively readable little stories that each feel developed beyond their few pages.”

With her newest short story collection, Erin McGraw gives her readers an incredible gift: one story to savor for every week of the year (plus a bonus!) if anyone could resist the urge to stop with just one. But as with potato chips or Girl Scout cookies, that’s nearly impossible. Joy: And 52 Other Very Short Stories is full of compulsively readable little stories that each feel developed beyond their few pages. Some are ironic or clever; others are poignant and wrenching; all of them are driven by McGraw’s strong, confident sense of voice for her characters.

Must-reads in this collection include “Haircut,” which opens with a scene familiar to parents with preschoolers—“ Two days ago my daughter cut her hair off. She is four.”—and morphs into the more complicated story of a young, uneducated mother’s fierce and frightened love for the precocious child for whom she wants more than she ever had.

“Breaking Glass” explores the aftermath of an affair, when the new wife begins test-driving the Porsches that the ex-wife sells, flirting with all that she can’t afford, including destroying a marriage from which the thrill has already evaporated. More than one story in the collection explores the effects cheating has on the guilty parties.

McGraw’s deep empathy for her characters is reflected in “Pariah,” which explores the psychological landscape of a post office employee who pursues an affair with one of his customers. The community shuns and shames him, and in response he does “all the things [he] was supposed to do” and also “the thing [he] wanted,” returning petty unkindness with petty unkindness.

McGraw also ambitiously narrates from the point of view of famous figures or those close to them. In “Ava Gardner Goes Home,” the title character brings her husband, Frank Sinatra, to her hometown in North Carolina where all the tension in their marriage bubbles up in the code of couples who thrive on passive aggression: “He looks at me and I smile, meaning thank you, and he glares, meaning you’ll pay. I glare back, meaning you owe me more than this, you prick, and Myra interrupts us, “Ava, look who’s here to see you!”

In “Cloth” Patsy Cline’s personal assistant recognizes the effects of fame on her boss even as Cline pretends they’re friends, tells her they’re “cut out of the same cloth.” She describes her own nightgown as made out of “cotton that’s perfectly fine until a person finds out about satin. That’s what talent does to you—it teaches you what other people don’t even think about. And then you’re never like other people again. Even if you want to be, even if you try.”

Joy works as a collection because the stories, more than merely being together because they are all shorter than traditional-length stories, play the familiar chords of characters wanting joy and paying for it with the grief and disappointment that accompanies wanting anything.

Some of these themes play out in multiple angles around one story, as in what could be called diptychs and triptychs. “Comfort (1)” and “Comfort (2)” narrate the aftermath of a shooting at a baseball game, first from the perspective of the man who fired the gun and then from the dead boy’s mother.

In the trio of stories titled “Soup”(1, 2, and 3), a woman dying of cancer, her sudden-friend-in-sickness, and her husband negotiate their complicated needs in a space that is literally and psychologically small, and the three short shorts each adopts a different character’s perspective so that the mini-collection amplifies all the complex emotional angles of such a scenario.

This collection ends with the beautiful, lyrical “Prayer,” driven by a series of sentences, almost all of which start with “Because . . . ,” as in “Because you promise to break and remake us when we go wrong, and because you have made us so that we don’t want to be broken, and we often go wrong.”

The characters in Joy don’t want to be broken and they often go wrong, and the beauty of this book is in how McGraw makes us love them for all their human flaws and fragile hopes.