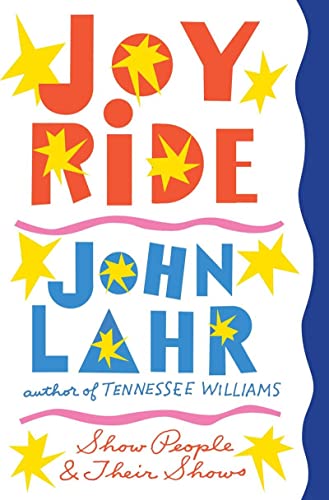 John Lahr just won the National Book Critics Circle Award for his penetrating biography of Tennessee Williams. His follow-up is Joy Ride: Show People and Their Shows, a compendium of profiles and reviews chosen from articles from his days as chief theater writer at The New Yorker. Lahr’s reportage, even in short form, is chatty, sometimes obsessively precise as he unlocks the creative impulses and aesthetic refinements from a gallery of theater luminaries.

Lahr catches up with Arthur Miller late in life as the playwright revisits the house he built around himself while writing Death of a Salesman. This is well-known theater lore, but Lahr gets Miller to talk about the anger he felt toward his own father who lost his money in the Depression forcing Miller to earn his own money and wait two years before he could go to college.

When Lahr presses the guarded David Mamet to open up about his parents and childhood, the prickly playwright threatened to call off the whole interview. Lahr’s compromise was that he would delve into those areas with Mamet’s sister, also a writer. Mamet takes no prisoners, and neither does Lahr.

In his interview sessions with August Wilson, Lahr deftly condenses Wilson’s turbulent  life vis-à-vis his epic ten-play cycle of African American life in the US throughout the 20th century. Wilson’s personality is so engaging and his artistic vision is so dynamic that you hope a full biography is forthcoming.

After playwrights, Lahr reminisces in a section on important and beloved productions. He gives a second look through the lens of the most recent revivals with his remembrances of the original productions of such seminal shows as Carousel, Pajama Game, Oklahoma!, and other classics.

As interesting as those nostalgic theater nights is an essay about the methods of Royal Shakespeare Company dramaturge director John Barton conducting  a Bardeen crash course for stage veterans Kevin Kline and Tony Randall. Barton’s classes are the gold standard for everyone who ever attempts to be a Shakespearean.

The book’s end section profiles great directors. He reminds us that theater directors emerged in the 20th century, before that the actors called the shots. He quotes his father Burt Lahr, beloved Cowardly Lion in The Wizard of Oz, but a stage veteran since vaudeville. “I give a director one week . . . after that I’m on my own.” Burt followed his own advice when he starred in the Broadway premiere of Samuel Beckett’s Waiting for Godot.

He engages the daunting and prolific Ingmar Bergman, as revered in Europe for his theater work as he is for his films. As much as Bergman gets Lahr’s praise as an artistic genius, he doesn’t hesitate to cite clock Bergman at being overly Bergmanesque, when he observes “Occasionally, Bergman’s stories collapse under the weight of their ambition to be the avant-garde of cinema and messenger of suffering. . . . verges on self-parody.”

In the mix are illuminating articles on Clifford Odets, Tony Kushner, Sam Shepard, Harold Pinter, and Wallace Stevens. Only two women are profiled. Lahr’s profile of the personal and creative journey of director-choreographer Susan Stroman is one of the most moving portraits in the book. And Lahr touches more on the current trends and artistry of the new generation of theatricals with a masterful portrait of playwright Sarah Ruhl.

Full circle in the intimate and revealing end piece with director Mike Nichols, written during the director’s luminous 2006 production of Death of a Salesman starring Philip Seymour Hoffman as Willy Loman, followed by a touching elegy and remembrance to two giants of the American theater, both of whom lost their lives in 2014.