Journey By Starlight: A Time Traveler's Guide to Life, the Universe, and Everything 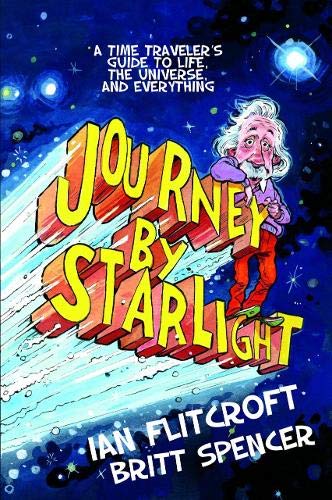 “Dr. Flitcroft and Mr. Spencer have created a showcase for why comics and graphic novels can be the perfect teaching tools.”

If you are ever going to have to travel across the universe at the speed of light you may want to secure Albert Einstein as a tour guide. In case this option never becomes available, you can do the next best thing and pick up Journey by Starlight.

In a little over 200 pages writer Dr. Ian Flitcroft and artist Britt Spencer employ the great scientist as a narrator in order to unravel as many mysteries of science and existence as possible.

Using the force of imagination, the beauty of illustrated images, and the might of the pen they open up an entire universe to anyone willing to peek inside.

Traveling with Einstein begins with an invitation from the scientist to join him on a beam of light. The ultimate destination will eventually be revealed, but he promises that the journey will be interesting. And because he is Einstein, we trust him without thinking twice.

The journey begins from a star inside the constellation known as Cygnus. Known to scientists as P Cygni, the light from this star takes approximately 3,200 years to reach us. Using this span of distance as a point of reference we are able to measure it against the vastness of the universe.

For it is imagination that is the real driving force behind what Einstein is both telling and teaching us. The authors make the importance of imagination very clear with a quote directly from Einstein: “Logic will get you from A to Z: Imagination will get you everywhere.”

It is our imagination that allows us to become magically converted to starlight. Like light itself, we transform into particles. Skipping past planets, asteroids, cosmic dust, suns, and across space and time, moving at 186,000 miles per second, Einstein guides us through the rules, concepts, and ideas by which the universe functions, according to the knowledge we have accumulated to date.

He starts by telling us of being age 16 and wondering what it must be like to be able to travel as fast as light. He then leads us into the idea that we can actually use light and the speed it travels to measure distance accurately. From there he takes us back across 3,200 years in world history.

It seems almost as if he is building the unstated idea that everything is relative to everything else. As the story builds we begin to realize that so much of what we see in science and in fact life is relative to many other things.

Grounding the story inside a straight narrative helps hold seemingly disparate ideas and thoughts together in one place. The best example of this idea occurs when about three-quarters of the way through our journey we finally enter the early 20th century. (Remember, as we are traveling across space we are also traveling through time. It takes 3,200 years for the light from our starting point to reach Earth.)

Einstein relates how Henry Ford originally built the Model T with the intention to use alcohol (ethanol) as fuel; however, in 1919 alcohol was illegal. A bit of a complication, yes. But Ford also encountered pressure from big business that was acting in the interests of oil production and investors.

Knowing this opens up new and exciting questions. If oil had never developed as our primary fuel source would we be having problems with climate change? Would we be experiencing political trouble with oil rich countries?

The authors never ignore the idea that science isn’t always the complete answer. They (and Einstein) are aware of the limitations of what we do know as fact. In a fair-handed and even manner they address global warming, the concept of God and creative design and several other conflicting or confusing ideas. Their evenhandedness makes the journey all the more enjoyable.

The formula E=MC² has entered into the popular lexicon as shorthand for something brilliant. But the real meaning, the essence of what Einstein reduced to a five symbol equation, actually scares a lot of people. Some consider it the formula for the Atomic Bomb, others see it as proof positive that God could not exist.

By the end of our time with the scientist we have not only a better understanding of what the formula really means, but the process by which he arrived at it. In order to build toward this we must travel not only across space, but through the history of scientific thought. Copernicus, Newton, and many others make appearances throughout our time with Einstein. Their theories come to literal life through Britt Spencer’s gift with a pen.

Mr. Spencer’s approach as an artist packs a lot of information into every panel. Despite having to convey an amazing amount of information he never loses us. He perfectly matches Dr. Flitcroft’s ability to lead effortlessly from one topic into another with a wonderful sense of exaggeration and an occasional burst of humor providing a welcome smile. Dr. Flitcroft and Mr. Spencer have created a showcase for why comics and graphic novels can be the perfect teaching tools. The format opens up avenues for understanding and learning that can only enhance the source material.

The greatest fact in this book? The idea that a Jesuit Priest came up with the Big Bang Theory! Journey by Starlight is the marriage of science and church the world needs!