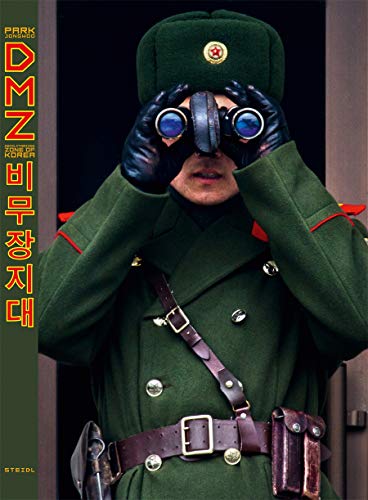 The border between North and South Korea is the Demilitarized Zone (the DMZ). It is one the most heavily militarized strips of land on the planet. The DMZ has become a locus for international tension, linguistic contradiction, and ecological beauty.

“The DMZ is a liminal zone,” is how Dr. Alasdair Foster begins his introduction to Park’s photography. Foster is Ambassador for the Asia-Pacific PhotoForum and specializes in consulting for international cultural projects. His introduction, entitled “At the Threshold” gives DMZ added academic heft.

Foster continues, “Park’s task, therefore, came with a considerable responsibility for, in such an intense but fluid environment, nuance is everything. In making his images, the artist chose to remain as objective as possible: to be a collector of evidence rather than a builder of narrative. The resulting images touch on curiously charged ambiguities of a place whose name is the antithesis of its nature.”

Park succeeded, as is evidenced by the fact DMZ won the Steidl Book Award Asia. Despite Park’s best intentions, narrative may be an inevitable by-product. Observer’s will build their own stories from the photographs, even if at an unconscious level.

The photographs themselves are lush and crisp. Since this is a Steidl book, quality is guaranteed. At the most superficial level, Park’s photographs evince a visual style similar to a feature story in National Geographic. What makes this volume stand apart is the care, precision, and passion given to the photographic image. Park’s project took three years to complete. His initial assignment came in September 2009 from a South Korean magazine wanting him “to create a photographic record of the DMZ. . . . The goal was to capture the present-day DMZ on the sixtieth anniversary of the outbreak of the Korean War.”

The simple premise of the assignment was complicated by the permissions he had to receive before photography even began. “To start with, every time I wanted to enter the DMZ I had to obtain permission from the authorities, namely the Military Armistice Commission of the UN Command, the Ministry of National Defence, the Joint Chiefs of Staff, South Korea’s Army Headquarters, and all the local army divisions.” The images Park captures betrays the bureaucratic nightmares and months-long advance planning necessary for even a single visit.

The evidence Park gathered could fit into categories as diverse as photojournalism, military photography, architectural photography, and nature photography. He curates his selection around the various boundaries separating North and South Korea. Each successive boundary is explained in methodical detail with accompanying photographs. It is a journey into a rugged landscape where language is contorted with Orwellian contradictions.

Jongwoo Park: DMZ is an incredible document. It offers a rare glimpse into a world only seen in the circumscribed rituals of international diplomacy and prisoner exchanges. Park does his best to present an unbiased and objective record of the military personnel, bases, and wildlife in the area. The DMZ becomes a real place. It comes into view with a rust on endless miles of barbed wire. It is seen in the eyes of soldiers on patrol. Goats, deer, and wild boar share the landscape, their paths stopped by the barbed wire and countless landmines.