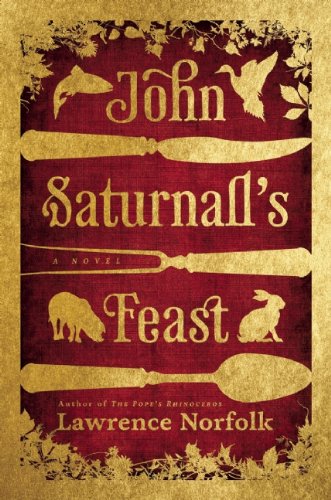 “John Saturnall’s Feast belongs in every library and perhaps even in the kitchen—just to remind the reader just how important a feast is.”

Any book with the word feast in its title should make the reader’s mouth water. Lawrence Norfolk does not fail in this regard.

The tale is set in early 17th century England and from the very beginning, Mr. Norfolk sweeps the reader into the era. He treats us to the smells and noises and sights and sounds and most assuredly the tastes that abound from that time in history. His use of the five senses treats us to a grand trip back in time.

Mr. Norfolk is an intriguing storyteller. And if only one word could be used to describe his tale it would be intense.

John Saturnall’s Feast begins with an introduction to a young man, John, who is bullied by those around him. He finds his safety in the warmth of his mother, who teaches him about “the feast.” Upon her death, he is taken to Buckland Manor, an estate fraught with intrigue, where he takes his first steps into kitchen life and gradually works his way up the ranks from kitchen boy to master cook.

John’s life takes a turn when Lady Lucretia, the young daughter of the lord of the manor takes to fasting rather than join into a loveless marriage arranged for the single purpose of producing a male heir to the property. John is given the responsibility to produce the mouthwatering foods that will turn Lucretia’s mind away from fasting and back to her marriage preparations.

His success exceeds even his expectations, as a strong relationship begins to develop between Lucretia, Lady of the manor, and John Saturnall, cook. When Lucretia agrees to her unwanted marriage, John is relegated back to the kitchen to prepare for the wedding feast and the second arrival of the King.

But as stories are wont to do, this one takes a turn as the king finds himself in the middle of a Civil War and the marriage is put on hold.

The kitchen staff, John included, is dragged across the warring fields until a return to the manor brings the story back home and once again into the kitchen. Over the sands of time, an unwanted marriage occurs, John departs, an heir is born to the manor, and yet the story does not end there.

Regardless of the other elements of the story—John Saternall’s growth from kitchen boy to master cook; Lady Lucretia’s impending yet unwelcome marriage; the king’s Civil War—all remain distant to the foundation of the story: the manor kitchen and John Saturnall’s Feast.

Mr. Norfolk’s skill with words puts the reader on his protagonist’s shoulder to experience the joys and pains he experiences; to taste the mouth-watering delicacies he creates; to ache for the love he loses, the enemies he bests, and the friends he carries with him throughout his life.

John Saturnall’s Feast belongs in every library and perhaps even in the kitchen—just to remind the reader just how important a feast is.