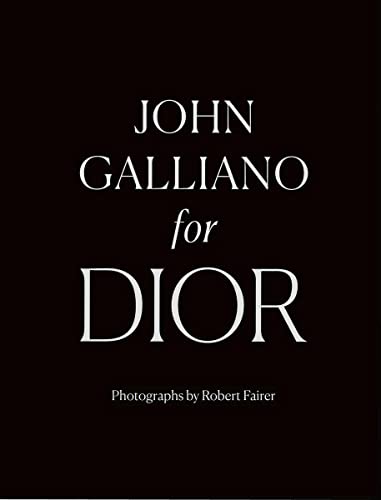 Here are some words that immediately came to mind upon finishing John Galliano for Dior: sumptuous, opulent, mesmerizing, all consuming, unimaginable, rapturous, incredible, and one of a kind.

Says Oriole Cullen, “He pioneered a brand-new way of presenting clothes, and set a radical new pace of stylistic change . . . I was continually dazzled by the sheer theatricality of his presentations.”

Robert Fairer in his trilogy of fashion photographic monographs has raised the bar to insurmountable heights. It is he who we can thank for recording the sights that are rarely ever seen by we mere mortals of the fashion world. He has taken us behind the scenes at Alexander McQueen, Marc Jacobs, and now John Galliano during his tenure at Dior. As Hamish Bowles wrote of Galliano and his “unfettered imagination,” Fairer transports us into a world where every one of Galliano’s fantasies and dreams come to life.

The behind the scenes images are what leave the reader energized, mesmerized, and practically hypnotized by the almost inconceivable oeuvre from one of the greatest masters of 20th and 21st century fashion. Galliano is a one-off in a world of overrated, under-talented, and over-hyped designers who couldn’t possibly hold a candle to this man’s abilities and talents.

Galliano was unquestionably a showman as well as a designer and might only be compared only to the likes of Karl Lagerfeld. Fairer’s chronicle is a treasure to behold since it is unquestionably all about the images. It is a visual recitation of a period in the fashion cycle that will probably never be repeated. The text is limited and yet informative without being obtrusive, pedantic, or gushing.

The most fascinating facet of Galliano for Dior is that it is a testament to creativity and visual imagery. Once upon a time Galliano was the king of fashion, able to sustain his reign via his innate curiosity, talent, and intelligence. Fairer has provided a paean to both Maison Dior and Galliano. Galliano for Dior should serve as a barometer as to just how untalented and overrated the designers are who proceeded him at Dior.

John Galliano was an innovator, a créateur of the highest order, and Fairer is a lensman who captures moments that reflect the pure joy and wonder of fashion without the filter of a runway.

So this reader doesn’t recommend this book but instead implores anyone who loves fashion and photography to own this awe-inspiring monograph that celebrates two aspects of fashion as well as two of its greatest talents.