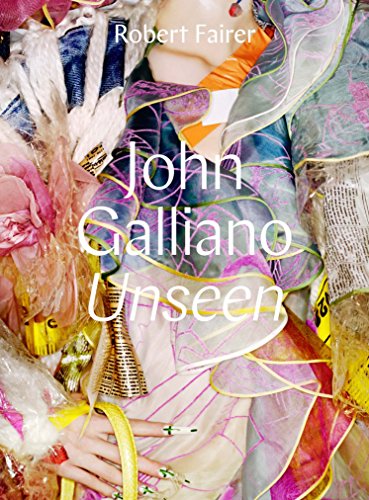 One of the most difficult tasks for any writer is to convey emotions to the reader as well as to elicit an emotional response from the reader. We all know that an image can provoke and evoke reactions in the brain, specifically the occipital lobe, but rarely does an entire book of images render a reader this awed and gob smacked just by leafing through it.

John Galliano: Unseen is a work that demands to be more closely examined; when read it will serve to remind the reader that fashion can be one of the most creative professions on earth. To further the point, Fairer affirms that fashion and photography are art forms. Take note here that the subject matter is focused on the eponymous collections of Galliano and not of his collections for Dior.

Unquestionably Robert Fairer has delivered a gift, a paean, and a love letter to every fashion aficionado, the business of fashion, as well as to any fashion reader no matter their level of fashion education. This uniquely gifted visionary with exquisite talents has taken it upon himself to jolt our fashion consciousness and literally shout at us that John Galliano is undeniably one of the greatest designers of our generation.

Another interesting aspect here is that Fairer takes the opportunity to celebrate the collaborations that have transformed Galliano’s insane imaginings into reality; in other words “it takes a village” so to speak.

“People want authenticity, whether that is an emotion of cut or drape, or how clothes are put together. It’s just what I feel.”
—John Galliano

Almost a year ago AlexanderMcqueen: Unseen (reviewed in NYJB) was released and was a fashion experience that few have ever accomplished in a book of fashion photography or within the fashion genre. What no one could have known is that with John Galliano: Unseen, Fairer has raised the bar even higher to acrophobic heights of visual stimulation and artistry.

Each image stands on its own and yet when assembled in this way, they chronicle the trajectory, show by show, of this stand-alone designer as well as offer insight into the unerringly discerning mindset of this photographer. Fairer has the clarity to understand and convey that not all the news and magic of fashion is on a runway.

One of the most fascinating aspects of this opus, given the paucity of text, Fairer and Wilcox provide great context; between his “essay,” her introduction, and the notes that finish the book, the reader is afforded just about as much context as possible with no editorializing. It is these features, facets, and words that set this volume on a higher plane than the majority in the genre.

The underlying message that can be taken away from this book is that Galliano was an astoundingly creative designer and storyteller who set the world of fashion on its ear, and Robert Fairer is the man who assiduously, clairvoyantly, and chronologically documents the rise of the designer via his particular and distinctive point of view.

Do not pass Go! Do not collect $200! Instead run out and buy this book since there are few that can compare!