John Ashbery: They Knew What They Wanted: Collages and Poems 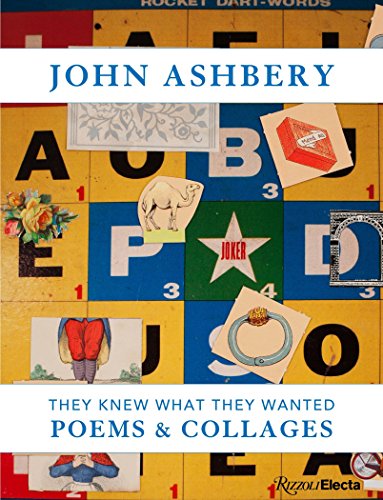 “Ashbery’s work is an assemblage fashioned by a genius, and They Knew What They Wanted is a great tribute, an absolute treasure.”

John Ashbery (1927–2017) was one of the most influential poets of the 20th century. He won nearly every major award for American poetry: the Pulitzer Prize, a MacArthur “Genius” Grant, the Ruth Lilly Poetry Prize, a National Book Award, and many others. He was less well-known as an artist, even though he was an accomplished one who started working in collage while still an undergraduate at Harvard.

This beautifully rendered collection They Knew What They Wanted provides the first comprehensive overview of Ashbery’s art and poetry and offers a rich, kaleidoscopic glimpse into his life and artistic process.

Ashbery was passionate about juxtaposition, and the collage aesthetic is central to any understanding of both his poetry and artwork, as editor, Mark Polizzotti, director of the publications program at the Metropolitan Museum of Art points out in the Foreword.

Though some consider Ashbery’s work challenging, the poetry and collage within this collection highlight his playfulness and how he cultivated his own lively imagination above all else. The 70 full-color reproductions included here are surrealistic and absurdist and underscore the influence of the abstract expressionist movement on his body of work.

They Knew What They Wanted begins with an “assembled” conversation that took place over a ten-year period between Ashbery and his former poetry student, John Yau. Topics covered include Ashbery’s childhood, the writers and artists who influenced him, as well as his friendship with John O’Hara among others. Yau’s interview with Ashbery provides the reader with an in-depth look at Ashbery’s creative development, which flourished early on:

“When I was a small child there was a box in the attic containing neatly trimmed scraps of material that had once belonged to dresses, aprons, blouses, dishtowels, and which were apparently intended for a quilt that never got made. I was fascinated by them and used to pore over them with the zeal of an Egyptologist. There was a language there.”

As a young boy, Ashbery came across a Life Magazine article on “Fantastic Art: Dada and Surrealism” and decided he wanted to be a surrealistic painter. Growing up in upstate New York—hardly a cultural mecca at the time—Ashbery embraced every form of “art” he came in contact with including movies, comic strips, and kitsch he stumbled on in antiques stores.

Both his poetry and artwork include numerous allusions to everything from Batman to Alice in Wonderland to Delmore Schwartz and the pyramids. As Yau says of his former mentor, his mind was “a vast domain of unlikely associations, of little known facts and memories, all effortlessly accessible anytime he needs them.”

The 19 poems that accompany the collages are presented in chronological order and are comprised of traditional pantoums, sestinas, as well as collage poems like “Hoboken” and “Europe” and “controls,” which are more dissociative or pell-mell in nature. The poem “They Knew What They Wanted” is made up exclusively of film titles beginning with the word “they.”

Aside from the brilliant artwork, the most captivating aspect of this book is the peek into Ashbery’s creative process and the parallels one is able to draw between his visual and literary art just by seeing them rendered for the very first time together on the page.

As Yau tells Ashbery at the end of their conversation: “In a number of your recent collages, it’s like you are about to undertake a journey or begin a dream.” And dream-like may be the most apt description of this work. After examining these collages, one won’t be surprised to learn that the first movie Ashbery ever saw was the fantastical Alice in Wonderland.

Though collage is sometimes derided as an art form, Ashbery’s work is an assemblage fashioned by a genius, and They Knew What They Wanted is a great tribute, an absolute treasure.