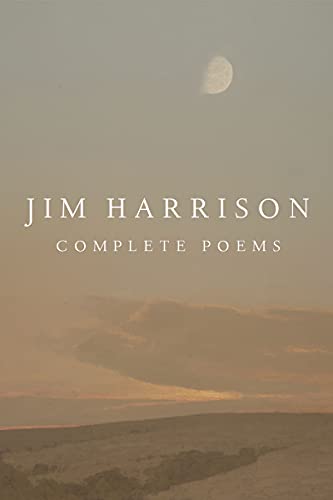 “this densely rich book, which places Harrison among the pantheon of our best American poets, will make readers wish in the coming years that he could still send more poems and missives from that barefoot heaven.”

Jim Harrison begins his poem, “The Theory & Practice of Rivers,” by invoking the geography of water, a force that indelibly shaped the life and writing path of this prodigious poet.

“The rivers of my life:

at night I can see the moon

up through the water

as shattered milk, the nudge

of fishes, belly and back

In late March 2016, on the Saturday morning before Easter, Harrison died working on a poem at his desk in Patagonia, Arizona, pen sliding across paper as his heart came to rest, a full stop for a writer who seldom slowed. Harrison published more than 40 books of fiction, nonfiction, and poetry over the course of his career.

This last testament of a writer who wed himself to poetry at the tender age of 16, “jumping from Jesus to John Keats,” is reproduced in a photo of his journal included in Complete Poems.

The intimacy of that hand-written page, a glimpse into what sustained Harrison throughout his life and the crises and suffering any life accrues, captures the liquid scrawl that in many ways is emblematic of the sweeping and uncanny associations he made in his poems with an alacrity and intelligence that was never off-putting.

In the final estimation, Harrison’s writing was grounded in the humble hardscrabble of his rural Michigan roots. Throughout the collection his knowledge of the natural world—whether that be as a lover of birds, or in his deep alliances with bear and trout, especially native brook trout, or in homage to the many dogs that roamed through the grasses of his life—informs his insatiable love. Or as he put it in the very first poem in his debut collection Plain Song (1965), arguably Harrison’s Ars poetica and austerely titled “Poem”:

“Form is the woods: the beast,

a bobcat padding through red sumac,

the pheasant in brake or goldenrod

And Harrison, like that bobcat, spent a lifetime stalking the pleasures and pains of the world, contending over and over that all flesh is one. He liked to remark that “we are nature, too,” all of us animals, sacred and various versions for which he praised God. It’s fitting that the very last line Harrison wrote at his desk on the day of his death names “God’s body” as the earth, what he claims is now a husk, after “Man shits his pants and trashed” it.

With the posthumous publication of this prodigious volume—ushered into the world with the fine editorial attention of Joseph Bednarik, co-publisher of Copper Canyon Press and longtime guide to Harrison’s books of poetry—we possess the completion and culmination of a life in verse, gifted with some of the best, most iconoclastic lines written over the second half of the 20th century and into the new millennium.

The single volume Complete Poems—(there is also a special edition that comes in three separate volumes in a slipcase)—includes an introduction by acclaimed activist and nature writer Terry Tempest Williams, who writes, “Jim Harrison . . . was among the great ones―an elevated soul in all his unruliness who favored his senses and courted the wild on the page and in the world. His was a storied life that loomed large, and we are the beneficiaries.”

As Harrison recounted in an interview in Esquire, “I probably wouldn't have been a poet if I hadn't lost my left eye when I was a boy. . . . A neighbor girl shoved a broken bottle in my face during a quarrel. Afterward, I retreated to the natural world and never really came back.”

That retreat and new way of seeing has wrought a gift of enormous grace and energy for readers. While Harrison claims in his poem “Prayer” that his “sight is only enough to see the moon, / the rising sun, the blur of stars,” it’s evident that this transformation allowed for a new way of attending to the often overlooked or neglected aspects of nature and humanity, artfully translated into far-ranging forms, including lyrics, prose poems, epistles, and ghazals.

In “Greed,” a later poem in which Harrison supplies a litany of his many worldly pleasures and prayerful desires, he fervently confesses his longing for his dog to outlive him, for “lovers who don’t ruin my marriage,” for “a huge twenty-cent burger / and a five-cent Coca-Cola,” for his “beloved wife” to last longer than him—(a wish that was not granted; she died the year before he.)—concluding with this final “greedy” petition: “that my / daughters live to be a hundred if they so wish” and “that I march to heaven barefoot on a spring morning.”

He did indeed leave the shuck of his body on a spring morning, and this densely rich book, which places Harrison among the pantheon of our best American poets, will make readers wish in the coming years that he could still send more poems and missives from that barefoot heaven.