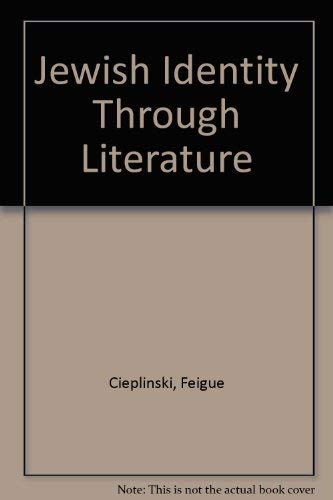 “thought-provoking explorations of the foundations of Jewish identity through literature . . .”

Jewish identity is today a fast-moving concept.  It encompasses everything from classic unchanging Orthodox, Hassidic, and Kabbalistic concepts to reformed and humanistic values that hardly resemble the same religion. At the same time, Judaism is anchored in the most ancient of all religious doctrines.

Cieplinski carries the reader along for the distance, exploring bible stories and selected writings to help readers trace the Jewish identity from Abraham to contemporary variations of Jewish dogma.

Cieplinski reconnoiters ancient Jewish experiences illustrated in the actions of Abraham, Isaac and Jacob, followed by the prophets, including stories of Joshua, David and Solomon. The meaning of the Torah is illustrated as the prescription for living a righteous life. It is a just life when it protects the weak and infirm, while making the world a better place for everyone.

The ancient doctrine took a thousand years to write and interpret and continues to be analyzed and much discussed today. Cieplinski illustrates her points through carefully selected biblical stories representing foundational and ongoing Jewish identity.

The recurring theme of retaining Jewish identity in the context of assimilation is carefully illustrated. This is particularly instructive with the scriptural tales of Jacob and Ruth. In both cases, a higher calling means that the individual must bend to divine will for the greater good.

With Ruth, we see the enormity of stress that transfigure someone as a result of joining a new religion, followed by the unwavering commitment that lies within the heart of a devout convert. Cieplinski grounds Jewish identity in ancient times with the Torah and she judiciously reveals its contemporary iteration through ages of interpretation.  All things spring from this ultimate book of laws.

In the time of the Talmud, Cieplinski investigates how laws extrapolated from the Torah are interpreted, defined, redefined and remain valid as the formative underpinning for three of the world’s greatest religions. And while she appropriately exposes how famous Talmudic rabbis interpreted Jewish laws, she also explores the vast chasm between ancient Jewish laws and customs against the ever-present aspiration to assimilate into gentile societies.

She postulates that there is an overt desire to understand how the Torah helps make any person in any time or place special, while the Talmud is a rock-hard source of guidance interpreted by the best Jewish minds over dozens of centuries.

Cieplinski emphasizes that Jewish history and identity describe a fallible people searching for identity, who were too proud, who did not adhere to laws, yet who still today strive for a Jewish identity. She stresses that we cannot acquire Jewish distinctiveness without exploring Jewish history and that literature provides the very best mechanism in which to explore the Jewish soul.

Yet having a set of Jewish laws (Torah) was not enough. Jews required an interpretation of the laws to function appropriately in daily life. Here, Cieplinski divulges the Talmud, which interprets and evaluates laws originating within the Torah. This intellectual effort and the viability of Jewish laws are explored in the context of assimilation and the Diaspora.

Next we see an investigation of the Jewish condition in Spain and the Spanish Inquisition, followed by the birth of the Hassidic movement and the European creation of a unique Jewish voice—Yiddish. Poems by great Yehuda Halevi and his emotional connection to Judaism and its history are explored.

Finally, Ms. Cieplinski explores the modern state of Judaism from the perspective of Zionist, American, Israeli, and post-Holocaust Jewish identity. The concept of healing and rebirth are central to this understanding of the contemporary Jewish identity. Hasidim have passed along the tenants, rituals and communal experiences of the Jewish distinctiveness with a unique language that expresses the Jewish soul in contemporary thought. It is a unifying theme that penetrates the essence of Jewish culture, literature and language.

The publisher might have added pictures, maps, diagrams and charts that contribute value for visual learners. Otherwise, the book remains well-edited and organized.

Cieplinski’s references are properly indexed. Biographical notes and citations are appropriate for a text of this educational status. The author’s empirical exploration of Jewish identity through literature is well written and evocative, delivering a logical, chronological, and cogent historical examination.

Cieplinski’s significant grasp of the subject is revealed in her analysis of prominent biblical stories that offer an opportunity for fascinating and innovative literary exploration. The enlightening commentaries divulge her considerable comprehension and influence as a teacher and as a talented writer.

These are thought-provoking explorations of the foundations of Jewish identity through literature and they add considerable depth to our understanding of the subject.