The Jewel and the Key 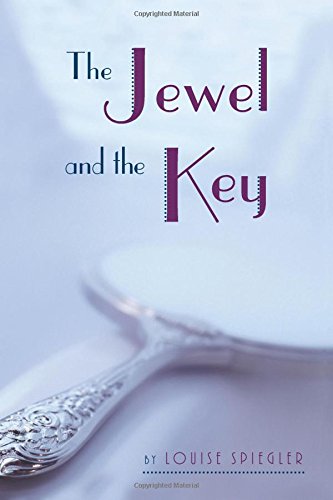 “The Jewel and the Key is an entertaining trip through time, and a refreshing change from the numerous bleak dystopian novels being published at present.”

That Louise Spiegler teaches history and is a self-described social activist will not surprise those who read The Jewel and the Key, her second novel for young adults. The book tells the story of 16-year-old Addie McNeal, a girl beguiled by the Jewel, a theater that once was a grande dame of the Seattle art scene but which is now a derelict wreck.

Addie is one girl; the Jewel is one theater. But a mysterious antique mirror connects Addie to two boys, two wars, and two eras set 90 years apart.

Addie loses out on a role in her high school play. Disappointed, she heads home only to learn that her good friend Whaley has been expelled for fighting and trashing the principal’s car. Whaley is a troubled, quasi-foster brother who washed up on the McNeal doorstep one day and was invited to stay in the family’s apartment behind a bookstore. Now he wants to drop out of school and sign up for the army.

Addie discovers a hidden closet in the bookstore and pries open the door to find a chest filled with theatrical flapper-era clothing. Shortly after Addie dons one of the vintage dresses, an earthquake rumbles through Seattle and nearly wrecks the bookstore. Whaley is assigned clean-up duty while Addie is dispatched to check on a family friend who lives a couple of miles away.

Addie discovers a silver mirror in the pocket of her dress on the way. She gazes into it and is transported back to 1917. Oddly enough, she doesn’t notice the absence of modern cars or shops that would tell her she “isn’t in Kansas anymore.”

Addie travels between the past and present several times before fully comprehending what’s happening. She finds herself involved with the Jewel Theater and with a young actor named Reg who is anxious to sign up to fight in World War I. In the present, she works with other people to salvage the Jewel and to discourage Whaley from going to war.

The mirror serves not only as the time-traveling device: It also mirrors the events of past and present, serving as metaphor for their juxtaposition. Reg and Whaley both want to go to war. The Jewel is endangered in both eras. Demonstrations fill the streets in the past and the present: antiwar demonstrators in the 21st century, and the Wobblies (Industrial Workers of the World union members) in 1917. Addie soon finds herself deeply involved with her new friends and the Jewel Theater.

The Jewel and the Key is built around an intriguing concept, and the details of theater life and the historical information are engaging. Yet Addie’s frequent absences from one time or the other are barely noticed and seldom commented on. She is assigned to be assistant director at the Jewel of 1917, but fails to show up because she’s working at the derelict Jewel or going to school in the present. She misses events with her friends in the present because she’s falling in love with Reg in the past.

There is a real key in the story, the key to the theater. But Addie herself is a key. She is the only one who can help her friends and save the theater in both eras. Can she keep the boys from enlisting? Can she find photographic documentation of the Jewel’s past glory that will allow the historical society to allocate renovation funds in the present?

Addie is not a complex character; her needs and wants are readily apparent. This is a “softer” YA novel than many of today’s edgier ones, lacking sex, drugs, and overt violence. There are young readers who appreciate this innocence in their fiction. The book is perhaps overlong in the middle, but the action ramps up in the end, careening to a satisfying conclusion with a poignant surprise.

The Jewel and the Key is an entertaining trip through time, and a refreshing change from the numerous bleak dystopian novels being published at present.