Jerome Robbins, by Himself: Selections from His Letters, Journals, Drawings, Photographs, and an Unfinished Memoir 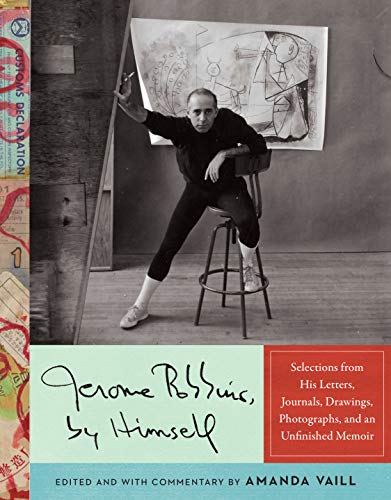 “Jerome Robbins, By Himself is an unfiltered look at a creative force of nature and an uncompromising artist who just happened to be one of the architects of a golden age of American dance and musical theater.”

Jerome Robbins’ legacy to dance and theater in America are inestimable. Robbins was ballet master at New York City Ballet where he choreographed modern classics, distinctly not in the style of NYCB’s founding director George Balanchine. He was a Broadway theater visionary creating such groundbreaking musicals as Gypsy, Peter Pan, The Pajama Game, and two undisputed masterpieces West Side Story and Fiddler on the Roof. He was also called in by producers to rescue shows in trouble.

Robbins was both admired and feared in the industry, with a reputation for often contentious relationships with dancers, actors, designers, directors, producers, and writers. One a famous story has him walking backward onstage and crashing into the orchestra pit without anyone onstage he was directing warning him that he was close to falling off. His reputation as a non-communicative director/choreographer was part of his legend.

So it is a revelation that Robbins’ extensive private correspondence and detailed analysis of his creative work filled his private journals and other writings that have now been collated by Robbins’ biographer Amanda Vaill, whose 2008 bio Somewhere is among the best.

Jerome Robbins, By Himself is a captivating self-portrait, of the man, the artist and his times. Robbins acted out and was often brutal with performers in rehearsals. But as his letters reveal, he just as often tried to settle things.

Vaill takes credit as editor, but she does nothing less than curate this material and adds incisive contextual analysis of Robbins’ journals and correspondence. As his private papers show, Jerome Robbins was a meditative and articulate chronicler of both his professional and private lives. His writings reveal as a passionately expressive artist, not only about what he created for dance and theater, but as he lived his life. Vaill organizes By Himself so that Robbins gets to tell his own story.

He stuck to his guns as a creative force and squared off with everyone from the “abominable showman” producer David Merrick to collaborators Harold Prince and Stephen Sondheim, and of course, George Balanchine. Vaill excludes reprinting any replies but fills in any timeline breaks with substantive biographical and contextual analysis.

Robbins’ diaries are conversational, intimate, and penned with candor and clarity about his successes and failures both professional and personal. He meditates on struggles as a bisexual and being an out famous gay man and reconciles his often strained relationship with his family and his eventual passionate embrace of his Jewish heritage. Robbins writes openly of his many affairs with men, starting when he was a student, and his early life as an emerging star dancer on Broadway and his first great love with fellow dancer Buzz Miller. He had significant relationships with both men and women, and several stars including Montgomery Clift.

A central story in the book is his passionate affair and relationship with NYCB ballet superstar Tanaquil Le Clercq, doing whatever he could for her after she was struck down with polio.

Robbins continued to grow as an artist, even later in life when his best work was behind him, he still threw himself into every project. His career took hits along the way, but none seemed more troubling to him than industry backlash after his testimony in front of the House Un-American Activities Committee (HUAC) in which he named names, even as he rationalized his decisions.

On top of Vaill’s own research for her previous biography of Robbins, she collates his voluminous private papers in the dance literature archive In the New York Public Library. This beautifully assembled volume features extensive photographs throughout the text and gorgeous color prints of Robbins’ diary entries that contain his own illustrations.

Jerome Robbins, By Himself is an unfiltered look at a creative force of nature and an uncompromising artist who just happened to be one of the architects of a golden age of American dance and musical theater.