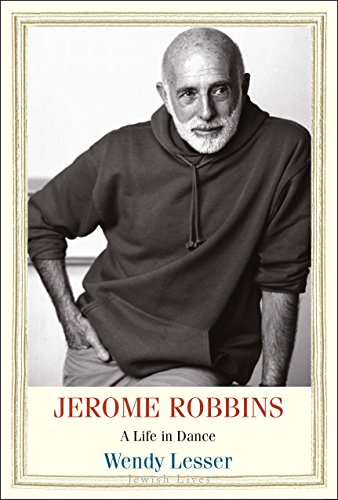 There have been two excellent, lengthy biographies of director-choreographer Jerome Robbins: Deborah Jowitt’s Jerome Robbins and Amanda Vaill’s Somewhere: A Life of Jerome Robbins. Wendy Lesser’s Jerome Robbins: A Life in Dance, admits that the factual material in her short book (under 200 pages), came from Jowitt’s and Vaill’s volumes. Lesser has provided enough facts about Robbins’s life to give us a sense of this difficult man and his creative process. Where she excels is in her detailed analysis of selected works that she thinks represent Robbins at his best.

Unlike her predecessors and many dance critics, Lesser thinks Robbins should be primarily remembered for his ballet choreography, not his work in musical theater. Lesser has a blind spot when it comes to musical theater, which she thinks is filled with, to use her adjectives, “coarseness,” “sentimentality” and “kitsch.” She has a clear preference for Robbins’s more cerebral ballets set to the keyboard music of Chopin and Bach and dismisses equally brilliant ballets like the popular “Glass Pieces,” which is one of his strongest works.

Lesser’s book begins with the dark side of Robbins. She mentions his legendary temper. He was famous for belittling and insulting his performers, often reducing them to tears. Robbins’ famous self-indulgent and insensitive behavior is part of an earlier era of theater and dance, which would not be tolerated today. Robbins’s successor at the New York City Ballet, Peter Martins, was recently fired in part for bullying the dancers (sexual harassment was a major element of the charges brought against Martins). One wonders if the legendary choreographer George Balanchine would survive in today’s more sensitive climate.

Then there was Robbins’s testimony before the House Un-American Affairs Committee in which, unlike many of his friends and colleagues, he “named names.” He later admitted that he did this out of terror that he would be “outed” as a homosexual and lose his career. For Lesser, Robbins’s success as “Jerome Robbins,” was necessary to hide the “untalented, unliked” Jerome Rabinowitz. So he betrayed friends to keep his career and berated colleagues to ensure the excellence of the work that had his name on it.

Lesser is candid about Robbins’s bisexuality, though his sexual relationships with men were much longer lasting than his affairs with women. His deepest friendship was with ballerina Tanaquil Le Clercq. The story of their relationship could be a book in itself. Once lovers, their relationship ruptured when Le Clercq married George Balanchine who married one after another of his ballerinas. Le Clercq knew that Robbins could never be totally faithful to her—there was always another man in the picture—and loved and revered Balanchine. The ballerina succumbed to polio and her friendship with Robbins became intense again after Balanchine left her for another dancer.

Much of the book is taken up with Lesser’s detailed descriptions of the Robbins dances she most admires. It is these analyses that make her book unique. For all the fame of Robbins’s early work for ballet and Broadway, it is the dances he created for the New York City Ballet that represent his best (and sometimes his worst), work. Last Spring, the New York City Ballet did a major retrospective of Robbins’ work to honor the centennial of his birth. Yes, his output was uneven, but he did create some work that is the equal of George Balanchine’s.

Lesser’s Jerome Robbins is eloquently written. The book is in Yale’s Jewish Lives series although Robbins’ Jewishness, like his attraction to men, seems to have been more of a problem for him than a sustaining force. Meaning for him came through making dance and theater and through the fame it gave him. Robbins was the first choreographer to insist on his role as an equal creator of musicals. He wanted star billing, and he insisted that his dances and his star billing be preserved whenever West Side Story, Gypsy or Fiddler on the Roof is given a major revival. Robbins will be remembered by most people for his Broadway work even though Lesser, with her prejudice against musicals, may play down that aspect of his career. Perhaps, as with his sometime friend and colleague Leonard Bernstein, that was a curse as much as a blessing.