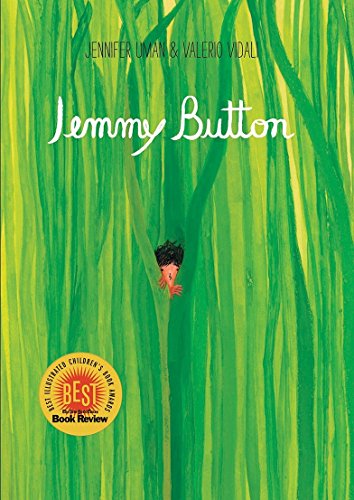 A dreamlike sense of wonder suffuses the singular picture book Jemmy Button as it unearths an odd social experiment conducted in the early 1800s.

On the remote islands of Tierra del Fuego, at the southernmost tip of South America, lived indigenous people, one of whom was named Orundellico. Readers see the child perched on the highest limb, surveying his world of tall trees and bright stars.

Intruding upon that serene scene is a group of identically dressed men in suits and top hats. As they part the vivid green blades growing on the island, they resemble awkward birds with misshaped claws and protruding tail feathers. Unlike the boy, they clearly do not belong in this setting. They do, however, have the power to initiate change.

They propose that the boy sail away with them. In return, they offer the child’s family a single mother-of-pearl button—hence, the genesis of Orundellico’s new, Anglicized name. “Jemmy Button said farewell to the island, to its trees and their boughs, and to its night sky filled with stars.”

The bizarre nature of this trade leaps from the vivid artwork created with gouache, oil paints, and collage. In a haunting double-page spread, the illustrators show the boy’s small, bewildered face as he peers through a porthole of the H.M.S. Beagle. Like the dazzling fish that live beneath the surface of the ocean, the thoughts and feelings of Jemmy Button do not concern the men who are moving ever closer to Britannia.

Throughout the book, the British are depicted in anonymous silhouettes. The only human eyes shown are those of the ruddy-colored child, who becomes a stranger in a strange land. By presenting a striking contrast in the boy’s native environment and his new one, the illustrators reveal how perplexed Jemmy Button must feel. The city is pale and pocked by the rigid, monotonous lines of skyscrapers and by a multitude of faceless people. The green, teeming life of the boy’s island home has no place here.

But soon we see a dapper-looking boy walking by the shops. He’s dressed in black and doffs his hat, as he’s been told. Yes, it’s Jemmy Button, who now looks “almost like everyone else. Almost, but not quite.”

Readers should not be surprised to discover that Jemmy begins to long for his real home. “He missed the trees and their boughs,/ and the stars in the night sky./ The time came to return home.” Perhaps they will, however, wonder how or why the British so readily agree to return the boy.

In the picture book, Jemmy Button immediately slips out of his clothes and back into his old way of life. In reality, however, it did not happen this way. In the 15 months the boy (one of four abducted islanders) had lived near London, he had learned English and had difficulty reverting back to his native language and customs, according to Darwin, who accompanied Captain Robert FitzRoy on this return trip and recorded his observations in his diary. Darwin noted the boy felt “ashamed of his countrymen.”

Yet in a return trip, Darwin wrote, “. . . [W]e were rather surprised to find he had not the least wish to return to England. Poor Jemmy with his usual good feeling brought two beautiful otter skins for two of his old friends & some spear heads & arrows of his own making for the Captain. . . . He seems to have taught all his friends some English.”

This picture book, created by breaking the boundaries of language (Ms. Uman knew no Italian and Mr. Vidali spoke only Italian), shows how members of one culture set out to impose their language, customs, and values on another, one they deemed “savage” and in need of proper British mores and religion.

While the disturbing implications of this experiment will linger in the minds of adults, children will most likely experience Jemmy Button as an unusual adventure story that leaves much unexplained.