J.D. and the Great Barber Battle 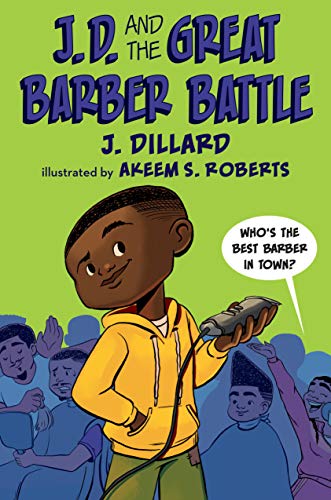 “J.D. and the Great Barber Battle is a refreshing slice of life about a small-town kid who discovers he’s gifted in unexpected ways. It’s a fun read.”

J.D. is a spunky boy who discovers he has a surprising gift. It turns out he’s a genius barber. This isn’t exactly the dream of every eight-year-old boy, but who are we to judge the likelihood of a child hairstyling prodigy?

It's the night before the start of third grade and J.D.’s mom has just given him his first home haircut. It’s a disaster. His classmates are surprisingly laser-focused and surprisingly vicious about poor J.D.’s haircut. He’s eventually overwhelmed by it all, and so he takes matters into his own hands. He discovers that, unlike his mom, he's a virtuoso with the clippers. His work makes him the talk of the town and brings him enough hair business to open a barbershop from his bedroom. (Remember, he’s eight.) But when the owner of the only official local barbershop, realizes he's losing clients to J.D. (again, he’s eight), he tries to shut him down for good. For good measure, he sics the County Health Inspector on him. We know the man is serious because he’s in “church pants and church shoes.” J.D. solves the challenge by setting up a GREAT BARBER BATTLE! Gotta’ hand it to an eight year old who has the grit to do that.

Okay. The plot is implausible. The likelihood of an eight year old with hair-sculpting gifts is a stretch for even the most cutting edge early chapter book. Still, the reader can’t help but like J.D and his brassy confidence. The reader can’t help but forget that most parents wouldn’t let an eight year old wield scissors, let alone hair clippers powerful enough to carve a team logo onto a scalp. The reader, well, is probably going to have to forgive a lot. It’ll be worth it.

The adventure takes place in the small town of Meridian, Mississippi, which “was a town of ones—one mall, one barbershop, one high school, one middle school, and one elementary school.” It feels like the kind of town that maybe, just maybe really could grow a styling wunderkind.

J.D’s family adds nice color to the story—the three-year-old brother who is J.D.’s first customer; a sister who is a big talker and makes friends with everyone; a mom who’s busy getting her MBA; a grandma who loves church and insists that the family goes on Sunday mornings, to weeknight Bible study, to Sunday morning Bible school, and to choir; and a grandad who is retired from running the local JC Penney and now sells burial insurance because as he points out, “We’re all going to die, right?” Together they’ll provide an interesting mix for future J.D. stories.

A significant bonus to the book is that J.D. is a Black kid surrounded by all Black characters—a rarity in early chapter books, especially books for boys. All children should be able to see themselves on the pages of the books they read. There aren’t many opportunities to do this for young Black boys, making J.D. and the Great Barber Battle a welcome addition to the early chapter book category for all kids, not just Black children. The book is loaded with lively illustrations by Akeem Roberts, which break up the text for young readers. Roberts has done a memorable job of using lighting to bring out the depth and beauty of black skin. They have a nuance that isn’t typical in an early chapter book.

According to the author blurb, Dillard is a master barber who started cutting his own hair at age ten (apparently, a slow starter relative to J.D.) and went on to become a personal barber who travels the country, so he at least has first-hand wisdom about the trials and tribulations of a young barber. One assumes this will also give him some material to work with as the series grows.

The book is a refreshing slice of life about a small-town kid who discovers he’s gifted in unexpected ways. Ignore the detail that J.D. is eight. It’s still worth the read.