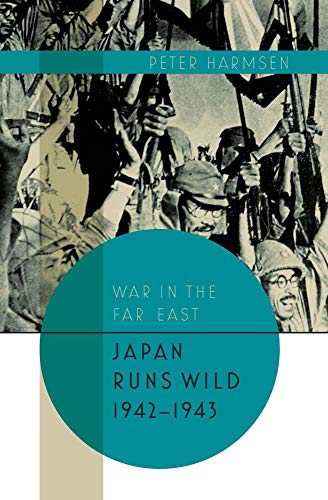 “The examination of this period of the war from the Japanese perspective offers some fascinating insights into how their lack of strategic thinking rendered their operational prowess unsuccessful in terminating the war on their terms.”

The 24 months after the Japanese attack on Pearl Harbor was indeed, as the title suggests, the time Japan ran wild. The second volume of a planned trilogy by Casemate Publishing, this overview narrative of the campaigns of 1942–1943 offers a concise narrative of the zenith of Japan’s Asian Empire and the tentative first offensives by the Allied powers, led by the United States, to begin to roll back Japanese military expansion.

Focusing primarily on the strategic and operational planning and outcomes of those crucial months, the author offers some interesting comparisons between the Japanese planning and Allied inaction and overconfidence as the war begins. The Japanese planned their conquests with very severe resource constraints of shipping, manpower, and logistics, and this lack of logistical considerations very nearly doomed their efforts to conquer vast regions such as Malaya and the Dutch East Indies, and only their overwhelming naval and air superiority, combined with serious Allied blundering, allowed their thinly stretched ground forces to outlast their beleaguered foes.

In couple of operations, the Japanese had to move troops around while campaigns were still in progress, notably the departure of an infantry division from the Philippines just as the Americans and Filipino forces withdrew to the Bataan Peninsula to complete the conquest of the Dutch East Indies. While this ensured Japanese control of the vital oil produced by the Dutch colony, it allowed the American led forces to fight on for a few more weeks.

The challenge for the Japanese, as the author notes, was the assumption that America would quickly sue for peace. Surprised by the scale of their initial victories, the Japanese struggled to find a way to end the war their leaders knew they could not win in the long run, and when America surprised them by fighting on, they could not devise a war termination plan. This strategic schism between the Japanese Army, still obsessed with the quagmire in China, and the Imperial Navy, still seeking a decisive fleet battle with the US Navy, was never truly resolved before it was overcome by events.

These events, the Battles of the Coral Sea and Midway, followed by Allied offensives on Guadalcanal and New Guinea shifted the strategic initiative away from Japan for the remainder of the war. Now the author examines the competing strategic decisions made by the Japanese and Allies as the tide of war begins to turn. Suffering severe resource constraints, the Japanese try to reinforce both the Solomon Islands garrisons and New Guinea and end up being driven back in both theaters. The allies now have to decide how to allocate their scarce but growing resources not only between the European and Pacific theaters, but between two competing services and commanders, the Army under Douglas McArthur and the Navy under Chester Nimitz.

In order to maintain the outsized egos and keep the inter-service rivalry down, the U.S. decides to maintain a two-pronged approach, sending McArthur and the army along the coast of New Guinea while Nimitz and the navy move up the Solomon Island chain. By late 1943, the Allies have firmly seized the strategic initiative and are able to not only isolate the Japanese bastion of Rabaul at the top of the Solomons, but launch their first attacks on the perimeter of the new Japanese Empire. By the end of 1943, Attu and Kiska Islands on the Aleutians were back in American hands and the Marines had completed their bloody conquest of Tarawa, the first American landing in the vast Pacific theater. In China, the Japanese Army continued to be tied down facing a seemingly endless supply of Chinese forces with no end in sight for that theater as well.

As the volume ends, the Japanese government must now choose from an increasingly narrow set of options as American might continues to build and the Chinese theater continues to be inconclusive. As the author points out, all sides braced themselves for the even bloodier fighting set to begin in 1944 as the Allied counteroffensive starts to move closer to Japan.

The author tries to cover a lot of material in this volume, so the narrative is kept at a higher operational and strategic level. The examination of this period of the war from the Japanese perspective offers some fascinating insights into how their lack of strategic thinking rendered their operational prowess unsuccessful in terminating the war on their terms. This is a serious lesson for students of warfare and strategy that no matter how operationally and tactically proficient your forces are, the lack of a sound strategy will ultimately lead to defeat.