Janis: Her Life and Music 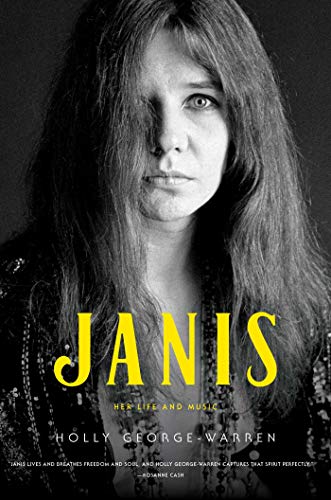 In the late ’60s, Janis Joplin shot to international fame after her performance of “Ball and Chain” at the Monterey Pop Festival in 1967. She died at age 27 in 1970 and half a century later, films of Joplin’s performances get thousands of hits from old and new fans via YouTube. Her raw performances and her persona as a hard drinking, drug using, gender fluid, do or die rocker, is still luminous.

There have been many biographies of Joplin, and this new one by Holly George Warren covers a cyclone of lore about Joplin, (including her trysts with Jimi Hendrix, Jim Morrison, Leonard Cohen, et al.) but Warren gives equal attention to Joplin’s sensitive, more guarded personality behind what drove her as a blues-rock diva.

Joplin had complicated relationships with her family and her friends growing up in Port Arthur, Texas. She was closest to her father, who started to withdraw his tenderness and special bond with her by the time she was in her teens. His coldness scarred her emotionally, and as Warren reveals the break affected her whole life. Her mother was distant and critical of Janis and in key moments indifferent to her emotional needs.

Joplin was ostracized at school; classmates and even friends made fun of her looks, and were obviously jealous because she was smart, and good at art and music. She was tagged as a whore, when in fact she was a virgin. Her parents convinced her to go to college, but she was by then pursuing music, was teaching herself to play guitar, and was starting to perform country and folk tunes in cafes and coffee houses.

When she was growing up her father had warned her of “the Saturday night swindle,” imparting his philosophy that no matter a person’s best efforts and achievements, they got nothing in the end. The many disappointments she endured personally and professionally validated her father’s philosophy, and she resented him for it.

In a time of amorphous popular music industry trying to steal the thunder back from the British invasion of the Beatles and Stones, Joplin was hailed as an authentic American blues belter with the authenticity of Bessie Smith.

Warren makes a good case that Joplin wasn’t appropriating black music. She admired and paid homage to legendary blues singers, but Joplin’s imprimatur was a self-made fusion of blues, country, and rock.

Joplin’s voice told much of the tale of her drug and booze benders. Her bourbon over gravel voice crashing and flaming out, then, a bar later, possessed the clarity of a lilting soprano.

She vamped her own image, even as she was increasingly isolated and desperate for success. Escaping to her San Francisco apartment to read and hang out with her pets, she connected to artists on their turf, not as a superstar.

At the same time, she knew how to move around in the business and make savvy professional career decisions. She connected with super-agent Albert Grossman for instance as a surrogate career father and let him talk her into leaving Big Brother and the Holding Company, to launch a solo career.

Big Brother was without doubt musically erratic, their success after Monterey branding them as Joplin’s band and causing much strife. In fact, their unpolished sound was more musically valid than was given credit for at the time.

Joplin admired the Otis Redding’s performance style and sound. She formed the Kosmic Blues Band, writing the title song herself and broadening her music into the soul-rock genre. They were formidable, but she switched bandmates again to form the Full Tilt Boogie and record what would be her final album Pearl. The group amalgamated her blues-rock brand and reignited her early career forays into folk/country with such songs such as Kris Kristofferson’s “Me and Bobbie McGee” and “Mercedes Benz.”

Warren doesn’t sidestep the tragic circumstances of Joplin’s accidental drug overdose, and her account of the star’s final days are sensitive and dignified. As quickly as Joplin would go down a self-destructive path, she could pull herself together for legendary comebacks.

But in other areas of this biography, Warren seems to dwell on gossipy accounts or one-night stands and, of course, drug benders of the glory days of rock, the permanent afterburn of Joplin’s blazing stardom.