Jane and the Raven King 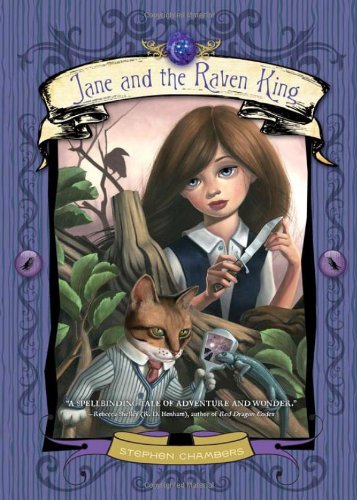 Part Alice in Wonderland and part Chronicles of Narnia, Jane and the Raven King is a magical, empowering gem of a book that opens up an entire genre to female readers.

This is the story of Jane, a quirky preteen, whose job it is to save the world from a force called the Raven King who has imprisoned all the adults in a technological trance. Jane is a smart, savvy female character, complete with all the usual adolescent vulnerabilities: She is misunderstood at school and unpopular. She daydreams and prefers animals and reading over television and fashion.

As the novel opens, Jane is in school staring out the window when she spies a squirrel packing a suitcase. The animals in Jane and the Raven King foreshadow events to come, and the main character quickly realizes that all of the birds and various animals are leaving earth or “topside” as it will become known to her throughout her journey. At home, Grandma Diana is visiting and her parents are behaving oddly, overly involved with their cell phones and computers.

In the middle of the night, during a chaotic rainstorm, Grandma Diana gives an underwhelmed Jane a purple stone, a pet lizard breaks out of the house, and strange Sansi stick shadow people appear forcing Jane to flee her home with her brother Michael. Outside, Jane encounters a bizarre blind man who drives and his flatulent dog.

Everything changes when she meets an odd stranger. Soon Jane will journey through to the underground area of the world where the animals have all sought refuge and her tour guides change form. This portion of the book conjures up some plot parallels to Alice in Wonderland. Jane embarks on an amazing and imaginative journey, led by Gaius, a cat bobbin that gathers children with potential and puts them through numerous tests to determine which one is destined to save the world.

Throughout the story there are strange and wonderful creatures and multiple references to Jane’s family history and the ones who have been called on before her. Jane learns her grandmother was a famous voyager once responsible for saving the world. As the plot progresses, she learns that her grandma has left clues and hidden items for Jane to find. But will she be able to find them in time to save the world? What is the Name of the World? Will Jane survive the many tests that Gaius has in store? Jane and the Raven King is a very suspenseful novel and, in that sense, a real page-turner.

It was hard to say who enjoyed this book more: my two daughters or me. I am not a big fan of science fiction and fantasy. Even as a child and a teenager, although a prolific reader, I greatly preferred fiction. Judy Blume trumped C. S. Lewis in my library. Far too long this genre has been closed to females, as most representations in these books were male characters, who battled in a warlike manner. Yes, there are battles and violent moments in Jane and the Raven King, but Jane is a strong female character from a family of strong women. She thinks things through, puzzles them out and intuits the answers always with passion, empathy, and an eye to saving her family. Also, in true girlish form she has many moments of self doubt and her esteem is often tested, her confidence falters. She is entirely likable and realistic in that way.

Even after Jane knows she has been brought to Castle Alsod by Gaius as one of the chosen few, we see her vulnerabilities as she enters the room full of young strangers and cannot find a friend to sit with at meal time. It reminds Jane of the school cafeteria and lunch time never belonging to a clique.

The knife on the front of the book in the illustration was initially off-putting to my oldest daughter, age nine. The imagery of a knife is scary—often an indicator that there will be blood or death in a book, but here it is, as revealed near the climax of the book, a tool with a map engraved on its handle. Had this type of book been around when I was a young teen I might have grown into a great fan of the genre. Luckily I am to be able to share this with my daughters. I believe this book should be celebrated. We look forward to a sequel.