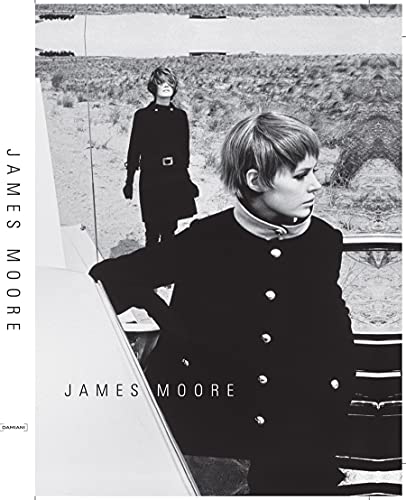 We as readers and followers of fashion are accustomed to seeing a familiar roster of names associated with the great and vaunted publications of the ’60s, ’70s, and ’80s. Most, if not all of us, expect to see the celebrated photographers such as  Avedon, Penn, Blumenfeld, Bailey, Scavullo, Newton, Arrowsmith, and others, but rarely does the name James Moore appear. Why not?

James Moore, the book, is a dazzling and yes, astonishingly and sensationally assembled chronicle of one of the greatest fashion photographers of the last half of the 20th century. The book is the quintessential photographic catalog of a single artist whose work is far more visually ubiquitous than the recognition of his name. This was a man who had passion, talent, vision, and a spirit that was practically unmatched in the world of fashion.

James Moore is extremely short on text, but what there is of it is more telling than if the authors had devoted reams of verbiage. The book satisfies the visual as well as the intellectual sides of fashion as the reader is quite literally forced to take notice of this man’s oeuvre. The bulk of the images were taken in the early part of his career and yet this incredible man had a career that spanned almost four decades.

This reviewer was woefully and barely cognizant of this man’s name but yet the images were indelibly etched into my fashion memory from many years ago. What can be derived from these photos is that he was an artist and master of his craft in so many ways. One thing that stands out about his work is that most fashion photography is rather two-dimensional. Moore gave a majority of his images a third dimension as you could discern the background from the star attraction. The images are timeless despite the emblematic clothes of the times. He used the colorations of the era to bolster the impact of so many editorials and covers.

An additional facet of the book is what is proffered if the reader actually reads the copy that accompanies so many of the editorials as it provides a walk down memory lane. The informed reader is reminded of some of the most memorable retailers, designers, and fabric houses that ever inhabited this rarefied world.

Unequivocally this is a must own and must read book for the reasons that are best and most tersely summed up by the words of Lauren Hutton:

“Jimmy was the unsung hero. The most underrated photographer of his generation.”