JAMerica: The History of the Jam Band and Festival Scene 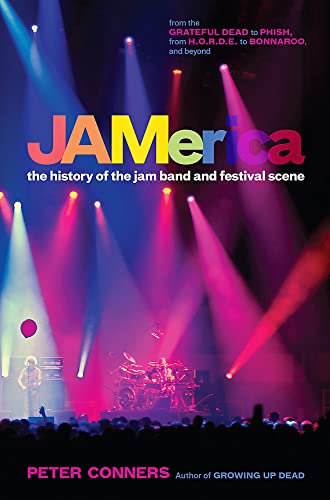 Imagine convening a get together of all the major players in development of jam bands and music festivals and listening to the stories they tell about various bands, festivals, and how it all came into being.

This is the scenario that Peter Connors has constructed for his readers in this interesting, engaging book. From beginning to end, each page features a series of quotes—some just a sentence, some stretching for a page or two—from band members, festival organizers, members of the media and fans as they discuss a series of general topics that illuminate a significant aspect of the American culture.

The book is a natural follow-up to Peter Connors’ Growing Up Dead, which chronicles his teenage years as a Deadhead (fan/serious follower of the Grateful Dead) as the term jam band emanated from the type of playing that the Dead and The Allman Brothers, among others, did in the late 1960s and 1970s. Both of those bands performed extended-length songs (in contrast to the two-three minute “hit single” length of many rock songs) that included long instrumental solos and on-stage improvisation that has roots in jazz. The music and scintillating solos propelled Duane Allman (The Allman Brothers) and Jerry Garcia (The Grateful Dead) to guitar god status.

The book, through its many spokespersons, emphasizes that most of these bands have extremely loyal groups of fan/followers and their participation in the music in the festivals is part of the motif.

But interestingly enough, a portion of the book is devoted to whether or not the term “jam band” is a good thing.

“I have run into so many musicians who don’t like that label, and I guess my gut is ‘Well, I don’t really want to be called a jam band, but when you think about it, that’s really what we are,” says Mick Vaughn, bassist for TR3. “I wouldn’t call us a jam band, but I don’t know what else to call us.”

“I don’t know what the ‘jam band’ category means anymore, other than a band that doesn’t play the same set list every night and is willing to do some improv on stage, take some chances, not come out with the polished show that you’ll see every night of the tour,” said Keith Mosley, vocalist, bassist and founding member of The String Cheese Incident.

“. . . a lot of people talk about the properties of jam band music that I hear in so many other kinds of music,” said Bela Fleck of Bela Fleck and the Flecktones. “I’m like, well jazz musicians jam, African musicians jam, bluegrass musicians jam. ‘Jam’ just means improvising as far as I know.”

“. . . no one wants to be stereotyped or labeled,” said Warren Haynes, who has played with The Allman Brothers and Government Mule and fronts The Warren Haynes Band. “If someone looks at the phrase ‘jam band’ is a genre of music that is full of open-minded musicians playing to open-minded audiences, then I’m all for it.”

The loyalty of The Deadheads enabled the Grateful Dead to fashion a new business model and establish an independence of sorts from the traditional record labels and the music business in general. Both the bands and their fans rebelled against perceived injustices wrought by a business that put profits over art. Mr. Connors and his contributors continually emphasize the importance of the fans for both the bands and the various festivals.

“I think at the core of it is the audience,” said John Skehan, vocalist and mandolin player for Railroad Earth. “It’s the audience that has a strong sense of participation in the music. . . . they really do thrive off that live experience as opposed to, let’s say, the casual concert goer who is going to the stadium or the dome once a year to come through and do their album tour and then go home.”

Taj Mahal offered that “The Dead proved that long ago. Connect with your fans and that’s all you have to do. You don’t have to play the corporate hit machine; you’re a hit with your people, they will support it.”

In direct contrast to the prevailing wisdom of the traditional music business, most of the bands allow “taping,” i.e., fans can make their own recordings of concerts and sell them to/trade them with other fans of the bands. Based on the Dead’s theory that “we’re done with the music, you can have it” it has generated a much different type of marketing.

“I think it’s a way of spreading the word to a different type of audience,” Haynes said. “We set up little taper sections. You get there early, you set up your microphones, you set up your DAT and your cassette. I don’t think it hurts record sales at all. . . . if someone is a fan of your band, they’re going to buy your records but they also want stuff that is not available commercially.”

The audience set the scene in other ways as well.

“In a couple of ways, the drugs people have taken have determined the direction the music has taken,” said Mark Mercier, keyboardist/vocalist for Max Creek, “and the advent of Ecstasy has developed a whole new set of hypnotic music that has to have a particular rhythm to it, the drum beat you hear all the time.”

The book does cover a number of other interesting aspects of the music and the way the musicians themselves were the key in the creation of many of the most popular festivals. Mr. Connors also ranges into some tangential areas, such as Grafetul Dead drummer Mickey Hart discussing “(u)sing drums as a diagnostic or healing tool is the most exciting frontier in music.”

JAMerica is a fascinating read for readers interested in how festivals and “jamband” music got to where they are and where it’s all going.

George Halas writes a monthly column dealing with music, comedy, books, and sports for SCENE, Wisconsin’s arts and entertainment newspaper. He has a degree in psychology from the University of Southern California.