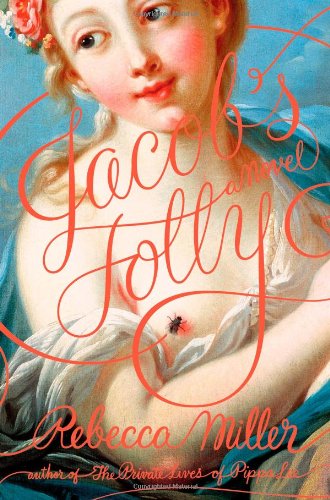 Jacob’s Folly is a tale of assimilation that combines both contemporary, historical, and fantasy fiction told with humor and suspense by a literal fly on the wall. The fly in question is the reincarnated soul of Jacob Cerf, a Parisian Jew who died in 1773 only to reemerge 240 years later as a housefly in Patchogue, Long Island.

When he realizes he can fly he thinks he must be an angel. Seeing how much smaller he is compared to humans he guesses he must be one of those angels that can fit on the head of a pin.

A glance at a mirror confirms his entomological transformation, yet he retains the cognition and worldview of his human former incarnation, which in turn convinces him that if he isn’t an angel he must be a demon, a part he plays mischievously with malevolently focused intelligence. Our author, Rebecca Miller, gives her bad bug narrator all the best lines.

This is a novel that requires multiple suspensions of disbelief. Not only does our insect narrator have human intelligence and the ability to read and influence the thoughts of particular people, but landing on each square of a genealogical flow-chart also enables him to visualize the everyday life of that human ancestor.

Jacob the fly divides his time between two humans, Leslie Senzatimore, a middle-aged boat repairman and volunteer fireman in Patchogue; and Masha Edelman, a 21-year-old Orthodox Jewish woman from Far Rockaway with a heart condition who secretly aspires to become an actress.

The narrative alternates between Jacob’s young adulthood in Paris and the lives of Leslie and especially Masha whose separatist Orthodox community parallels the segregated and insular Jewish community of Louis XV’s Paris. The difference of course is that Masha’s community voluntarily segregates itself, whereas in monarchical France the segregation was imposed.

Before the French Revolution the lives of French Jews differed little from those of their ancestors during the Middle Ages, including both strict ritual observance and a belief in demons. They continually must reapply for two to six month permits to live in France, could not carry weapons, and their livelihoods were restricted to pedaling and money lending.

Jacob has neither a head for rabbinic scholarship nor for finance. As a poor catch at age 17 or 18 he finds himself married to an emotionally stunted 14 year old whom he entertains by participating in tea parties with her dolls in the evening and with whom he enjoys conjugal relations at night.

His days are spent wandering the streets of Paris wearing his Jew’s Box, a cabinet suspended from his neck whose drawers contain the merchandise he pedals.

For Jacob an escape from the confines of his circumscribed world comes in the offer to become a valet to a nobleman, the Comte de Villars. For Masha it comes in secret lessons at a drama school. Neither character can conceive of living a meaningful Jewish life outside the confines of their community. Both feel they must either conform or escape.

For Jacob living before the French Revolution this is understandable. Years after his departure from the ghetto and the subsequent loss of his job as a valet, after which he became an actor, a Jewish former colleague visits him and asks if he still lives as a Jew, to which Jacob replies, “I live as a man.”

It was not until the 19th century that writer Yehuda Leib Gordon penned the motto of the Jewish Enlightenment, “Be a Jew in your home and a man on the street,” which in the 20th century would evolve into an integrated identity that is fully Jewish and at the same time worldly and cosmopolitan.

While that integrated identity was understandably inconceivable to Jacob, sadly it is equally inconceivable to Masha, who has no experience of Modern Orthodox, much less Reform or Conservative Judaism. Ms. Miller could have given Masha a mainstream Jewish drama-school classmate, but either that never occurred to her or she decided against it. Consequently, neither character can conceive of acculturation as an alternative to assimilation, and Jacob’s Folly implies that Jews must chose: either total assimilation and loss of identity or resegregation.

Apart from that disturbing implication, Jacob’s Folly is well written, humorous, and entertaining. The wealth of details in both the 18th and 21st centuries is convincing, including the respective theater worlds that both Jacob and Masha enter and which Ms. Miller—who has also written screenplays, directed both for film and television, whose father was playwright Arthur Miller, and whose husband is actor Daniel Day Lewis—knows well.

Notes on the Audio Version
In the audible.com audiobook version of the novel narrator Adam Sims uses effeminate voices for the Comte de Villars and Masha’s theatrical agent, an artistic choice that perpetuates negative stereotypes—though whether readers view these characters as villains or liberators will depend on their view of assimilation—and he places the stress on the wrong syllable of some Hebrew words, but otherwise provides an engaging and entertaining performance.