I've Seen the Future and I'm Not Going: The Art Scene and Downtown New York in the 1980s 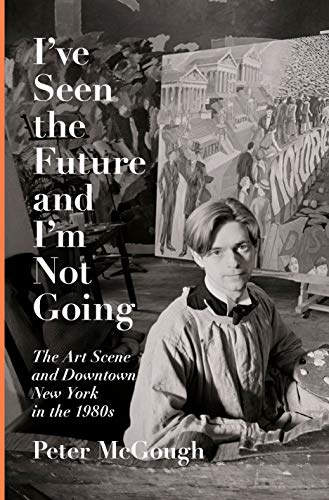 “a clear-eyed portrait of the realities of the arts scene of the era. And McGough’s candid account of trying to survive AIDS, poverty, and lost love and still create art despite all odds is a moving self-portrait.”

Peter McGough and David McDermott were multimedia artists at the forefront of avant-garde New York downtown gallery scene of the ’80s. They were gregarious lovers, personalities on the town, part of the Warhol glam scene, but as suddenly as they gained fame and fortune, they lost it all and almost each other. McGough recounts their story and this legendary era in American art in I’ve Seen the Future and I’m Not Going.

McGough grew up in a large, conservative Catholic family in Syracuse, New York, in the ’60s and ’70s. His mother was supportive of Peter’s creative side. At school Peter was bullied by fellow students, but he didn’t try to change who he was, he just kept to himself, encouraged by his teachers to work on his obvious artistic talents. Meanwhile, Peter knew he was attracted to boys and was not ashamed, he knew early on he wanted to be part of New York’s gay arts world.

After attending Syracuse University and TIFF, the design and art school, he landed in Greenwich Village and eventually at the Chelsea Hotel down the hall from other artists—even Sid and Nancy. Soon enough he was also part of New York’s radiant post-Stonewall gay culture, dating other artists, hanging out with designer Michael Kors and other comers in the fashion world, hitting the gay dance clubs and leather bars.

McG and McD, as they were known, fell in madly love. David was obsessed with the fantasies of elegance of the early 20th century, he dressed in top hats, frock coats, suspenders, and even vintage drawstring underwear. They filled their cold-water flat with old furniture and refused to use modern appliances.

Meanwhile they had to work in the gay clubs for fast cash and still pursue their art careers. Peter designed the interior for Danceteria, one of the hottest gay clubs. And they became part of the go downtown scene, the work started to be noticed, and attracted art dealers who were opening galleries in the Village and courting new stars like Jean-Michel Basquiat, Keith Haring, and David Warjnorwicz.

Trying to get out of the club life and become full time artists, they rented an abandoned building on the Hudson and lived the rustic bohemian life. When they had to get out of there, they rented another abandoned house and started to restore it so the owner let them stay for free. But that arrangement ended soon enough and they were back in Manhattan with David’s mother writing checks so could get their own place.

By 1980 they started their own art and design company. And were being noticed; they were sought after by powerful gallery owners and agents. When they purchased vintage cameras and started to do portraits and period pieces they were in high demand. Using multimedia forms they were selling out shows.

They also got involved with a 20-year-old college student, “Bastian,” a straight man who seduced them and eventually tried to take them for everything they were worth. Peter ended up being the odd man out in a ménage a trois that turned their lives upside down at the height of their success.

The New York art market fell victim to the 1987 stock market crash and McDermott and McGough’s commissions were drying up. Within a year they were so heavily in debt they lost their properties and were forced to sell their possessions. Their relationship fell apart.

The art and performance worlds in New York were two of the hardest hit communities of the epidemic. As temperamental and egotistical as McDermott could be, McGough notes that he dropped everything to help friends who were diagnosed with AIDS. Peter fell ill and was diagnosed, but refused to go on the only available medications, which be believed would kill him faster.

Julian and Jacqueline Schnabel tried forced him to seek medical attention after Peter’s pursuit of a holistic approach to survive the disease was bringing him to the brink of death several times. Meanwhile, David had moved to Ireland with relatives to begin a new life, but when he found out that Peter was battling AIDS, he returned to him and they reconciled.

McGough’s memoir is frustrating in some ways, leaving a lot said between the lines in his memoir, especially the disastrous relationship with Bastian. Meanwhile, he writes a clear-eyed portrait of the realities of the arts scene of the era. And McGough’s candid account of trying to survive AIDS, poverty, and lost love and still create art despite all odds is a moving self-portrait.