It's Not Over: Getting Beyond Tolerance, Defeating Homophobia, and Winning True Equality 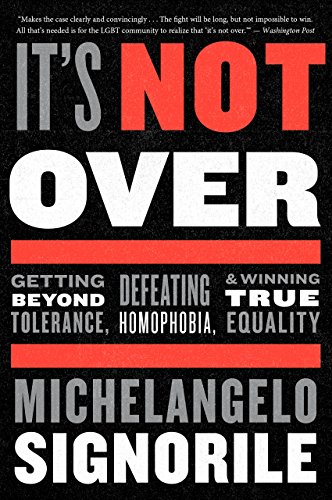 It’s Not Over is Michelangelo Signorile’s rallying cry to gay America that despite the huge victories of same-sex marriage, and gays and lesbians being able to serve openly in the military, it is too soon to declare this a new era of LGBTQ equality.

He writes in his opening chapter that we should not to be lulled into complacency with “victory blindness;” in fact he assures more vigilance is required so gains for sexual minorities are not legally nullified.

He deconstructs the current environment of open hostility toward gays by powerful lobbyists and religious groups conspiring with like-minded politicians and powerbrokers who want gays to disappear. It‘s a moneyed, ugly, homophobic tide as virulently as the McCarthy witch-hunts of the 50s.

Signorile has been on the front lines reporting and debriefing on GLBTQ issues for 25 years. His first book Queer in America (1993) is ranked as a defining j’accuse against homophobia and political negligence at the height of the AIDS epidemic. He also became a cause celebre at the time for “outing” closeted politicians who legislated against pro-gay rights

A generation later, Signorile still has his hand on the pulse of gay America with his Sirius XM Radio show and as editor-at-large for Huffington Post Gay Voices. His other hand is on the jugular of the moneyed antigay forces who are stoking the homophobic cultural backlash and moving to chip away at any pro-gay civil rights gains of the last two decades. It’s Not Over expands on familiar polemical territory of GLBTQ diaspora, but it is hardly a rehash; it has the urgency of vital manifesto.

In his chapters on the rise of openly antigay politicians, lobbyists, and evangelicals, he dissects and exposes their tactics of perpetuating myths about homosexuals that have long ago been debunked by just about everyone save for homophobic bigots and entrepreneurs who have a free pass to condemn and malign fellow American citizens and hide behind the religion and the flag.

The book’s release is in the direct wake of a tidal wave backlash to the so-called “religious freedom” bill that moved through the Indiana legislature and was signed into law by Gov. Mike Pence.

Pence appeared shocked at the immediate backlash from corporations, GLBTQ groups, and other state governors. No one was buying his explanation that he didn’t know it was aimed as sanctioning discriminating against gays. He was warned by, among others, the Chamber of Commerce that it would happen, not to mention the official photograph of Pence signing the bill, where he was flanked by known antigay operatives.

The law was rewritten within days as Pence cynically went into damage control mode when there were threats of #boycottIndiana on social media and public outcries from the  LGBTQ organizations, corporate CEOs, and governors from around the country.

Signorile weighed in on HuffPost immediately in a blistering analysis that defines the new battleground between the pro-gay and anti-gay movements. In It’s Not Over, he gives the full back-story of the backdoor discrimination bills moving through several states.

In his chapter We Don’t Serve Fags Here he exposes how the GOP and right wing lobbyists used their entrenched networks of antigay entrepreneurs to stoke divisiveness.

To his fellow gay Americans Signorile writes eloquently about being out, proud, and forthright about your own truth in your daily life with family, friends, coworkers, employers, community, and homophobes—not to back down, be identity neutral or “cover” just because you are in a hetero-dominate environment.

He further advocates for “going big,” not settling for incremental civil-rights for GLBTQ Americans and allies; nothing less than full civil rights and equality across the board in business, housing, public accommodation, healthcare, marriage, and everything that should be legally in place for American citizens. Signorile has never been more tactical and inspiring as he is in It’s Not Over, and he knows he is not just inspiring the choir anymore.