It's Not Love, It's Just Paris 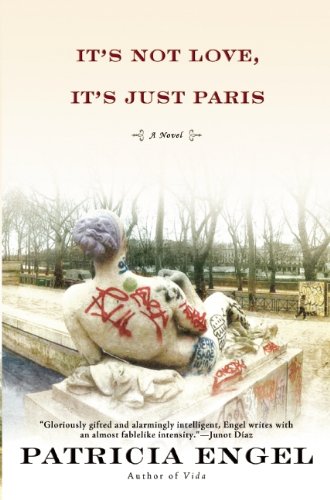 “. . . engaging and nicely written but also heavily formulaic and one-dimensional.”

Patricia Engel’s novel It’s Not Love, It’s Just Paris is narrated by Lita and tells the story of a young woman who spends a year in Paris living in a decaying Left Bank mansion called The House of Stars and, you guessed it, enters into a doomed love affair. The novel is engaging and nicely written but also heavily formulaic and one-dimensional.

In this hackneyed tale, Lita, the American daughter of poor, Colombian immigrants to the U.S. who made a fortune from a Latin food company, comes to Paris in 1997 to study French and diplomacy. Along with other wealthy young women, Lita resides in The House of Stars owned by the aged, bedridden Countess Seraphine, who spouts truisms about love and life while lounging and smoking in bed.

The smart but naïve Lita meets Cato, the sickly son of a Jen-Marie Le Pen-like right-wing, anti-immigrant politician and falls in love. The dramatic tension is clearly set up for the reader. Will Lita stay in France with the ill Cato defying both of their families or will she return to America to her family?

Ms. Engel adds modern twists like the Colombian “greenbloods” background and the Le Pen reference to this Romeo and Juliet-like story, but the clichés still abound.

The novel could develop the issues of social class and new money versus old money but doesn’t and instead creates stock characters. The other girls in The House of Stars are each a type who can be summed up in a paragraph: “Tarentina reigned as the VIP queen at nightclubs full of the highly moneyed and their hangers-on, while Giada’s network consisted of hippie kids, techno-mongers, and art students from Oberkampf to the Bastille. Dominique ran with the Phoenicians, the Persians, and the petrobloods. Camila’s leg was the Latin. . . . Saira’s contingency, beyond Stef, was the Swiss boarding school alums. . . . Naomi’s original crew consisted of the Americans, Australian, and Brits.”

So there you have it.

Seraphine, the proprietress of “The House of Stars,” is also a caricature of a pseudo-philosophical old French aristocrat who spends her time reminiscing about past love affairs and giving advice about romance and love to her young tenants.

Upon her death bed Seraphine tells Lita: “I was born for this life, this house. It was my destiny. . . . Good-byes don’t serve anyone.” And then, “’Come, cherie, come to my side.’ She made room for me on the mattress and took my hand in hers. ‘My dear Leticia. Sometimes the worst thing is bliss, because once you have experienced it, you know it is very unlikely you will find it again.’” Seraphine, as well as Lita’s parents and housemates spout truisms endlessly.

It’s Not Love, It’s Just Paris is the tale of star-crossed or ill-fated lovers. Like many an opera, one of the lovers, in this case the male, Cato, is ill with a mortal lung disease. Since destiny and doomed love are major themes of this work, you can probably guess what happens to poor Cato.

Toward the end of her story Lita naively writes of her relationship with Cato: “I was still full of hope. I thought we had our whole lives ahead of us. I could do everything I needed to do and still find my way back to him.”

“I didn’t yet know what was written for us.”

Given the endless discussions of fate and Cato’s state the reader certainly does.

Despite its many flaws, It’s Not Love, It’s Just Paris is fairly well written and charming. Lita, naivete and all, is a pretty credible 20-something-year old narrator. Her astuteness but also youth and inexperience come through in her narrative. She describes Seraphine’s son Loic the unproductive artist as “in a period of creative fermentation, which sounded to me like a whole lot of nothing, but Loic was almost thirty, so I figured he knew something about life that I didn’t.”

One of the characters tells Lita that everyone comes to the Puces or Paris flea market “for the story.” Even though the story of It’s Not love, It’s Just Paris is predictable and has been done many times before, it is an engaging tale, ideal as a vacation read.