It's Enough to Make You Sick: The Failure of American Health Care and a Prescription for the Cure 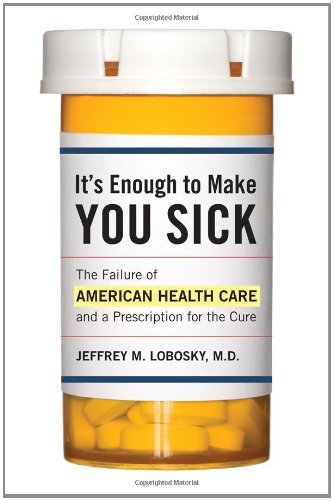 “As the stench from the election year permeates our air, keep this book on hand . . .”

The doctor is in the house.

This book offers a cogent, uncompromised look at what our health care system has wrought.

Dr. Lobosky is not your typical East L.A. name, but hale from there he does, and he provides the Grand Canyon view of health care in America through his career as a doctor on the front lines of health care delivery.

Moreover, he does not spare any punches with his contemporaries, either, making the book both a good read as well as objective—not always the case in the health care furor these days.

Dr. Lobosky lays the blame on diminishing physician pay at the feet of managed care organizations whose mantra was quick to be adopted by insurers ever on the lookout for a negotiating chip.

Keenly, Dr. Lobosky reveals that insurance companies have been prone to reward service contracts to the lowest bidder, not necessarily those with the best clinical outcomes.

Dr. Lobosky goes on to say that in order to make their payroll obligations, doctors had no choice but to increase patient volumes. Antitrust laws appear to have worsened the matter by prohibiting physicians from discussing their insurance reimbursements. In this case the insurance companies seem to have the upper hand.

As a neurologist, Dr. Lobosky reveals that emergency departments nationwide have had to close as the necessary specialists to staff critical care have opted out of this on-call obligation. This is due to the phenomena of the E.R. as the health care provider of last resort for the uninsured and the underinsured (Medicaid patients) and consequently pays so little to highly trained specialists as to not be viable.

As a doctor, the author critiques health care from a unique vantage point, and he does so with the messianic zeal of a modern day Elliott Ness.

Using World Health Data, he discusses U.S. health care revealing the country ranks 30th in global measures for maternal mortality rates with 14 deaths in childbirth versus our neighbor to the north, Canada, which has only five.

Finally, someone is speaking up about the opportunistic billing of the uninsured by America’s hospitals, which charge the highest rate for services to those without cushy insurance contracts, and then allow these patients to think they are getting “charity care” after making them pay what the hospitals would normally get from their average insurance company.

The hospital then goes on to deduct the unpaid difference as charity care—even though none of their contracts with insurers would ever pay the sums they attempt to extract from the uninsured.

Dr. Lobosky takes on opportunistic pricing of drugs, hospital care, and others like a freshman, instead of someone with a lot to lose. Bravo! Dolefully he even lambasts the A.M.A. for failing to effectively represent doctors, not just in primary care, but in specialties as well. This may be the reason only 20% of doctors are members of the American Medical Association.

Dr. Lobosky reveals the cash payments—oh excuse me, “contributions”—to politicians by insurance and health care interests functioning under the new law that allows corporations to donate as people do.

Oh, and couch potatoes are not ignored either, with entertaining stories from the doctor about American bad habits and how our medical system negatively reinforces them.

Perhaps we should regard the book as the “tipping point” in our understanding of the health care access problem, as Dr. Lobosky astutely reveals that reducing incomes for doctors—income that declined by 7% between 1995 and 2003, coupled with the increasing cost of obtaining a medical education, and the constant pressure to reduce their fees from both government and private sector health plans make the practice of medicine less attractive.

Given the 2010 health care reform model is based on the use of health insurance to increase physician access and expansion of the Medicaid program, which pays an appalling low fee to doctors, why would they accept more underpaying patients?

Thus the country may mandate insurance purchasing and hope the newly covered low income folks have access to care, but the mandate does nothing to fix this misalignment.

Physicians are being treated like factory workers in the medical industrial complex, yet they are supposed to be delivering patient centered care.

Throughout It’s Enough to Make You Sick Dr. Lobosky provides clear examples of how current programs, including medical schools, are not generating enough doctors to supply the nation’s needs. Up to one fourth of the physicians in the United States received their medical training elsewhere and then must sit for an arduous exam to secure a U.S. residency position. These candidates are now expected to pay $1,200 to take the exam, prohibitively expensive for many.
.
Though Dr. Lobosky’s Solutions to the health care crisis in the final chapter is cogent, it may have been more readable if it had been broken down into multiple chapters (after all it is one third of the book).

As the stench from the election year permeates our air, keep this book on hand for some straight talk on the real machinations of the U.S. health care system when one of those pundits comes a-calling.