Italian Ways: On and Off the Rails from Milan to Palermo 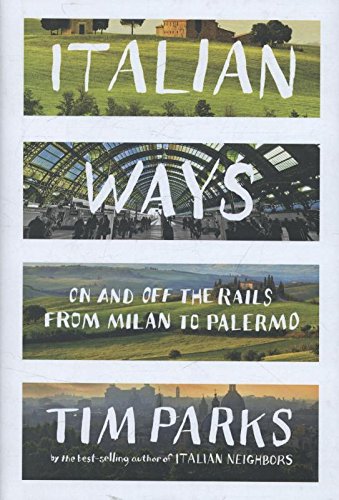 Finalmente. A decade after British author Tim Parks amused readers with his wry, perceptive accounts of living with his wife and children in Verona, he heads for the tracks that have taken him to work, and in time, all the way down to the stiletto tip of Italy.

With pungent prose and a novelist’s sense of timing and of illuminating metaphors, Mr. Parks places the railways in the context of his adopted country’s culture, history, and Alice-in-Wonderland economics, exploring the tension between a slower, often gracious Old World and the hyped-up, tech-frenzied new one.

Often, he reveals, improvements aren’t as practical or as pleasing as they appear to be.

In the 32 years he has lived in northern Italy, Mr. Parks has come to terms with his outlander status: “You’re never quite a native, but you’re no longer a stranger.” This dual perspective shapes his vision as a curious wayfarer who traces the connections between train ways and national character by providing vivid historical highlights and humorous musings on Italy’s many ironies and contradictions.

“. . . [T]o move on rails through a beautiful landscape is always a pleasure, and strangely conducive to reading,” the author notes. And what a window on humanity this mode of travel provides. From chatty students on cell phones to the weary old whiner . . . from the tired-eyed immigrant prostitute to the sweaty, belching beer-guzzler . . . from the furbo, the sly one bent on getting something for nothing to the opposite, to the pignolo, the obsessive rule enforcer who “always believes that everybody is furbo.”

A novelist can find plenty of material here, as can a chronicler of a nation’s quirks.

Yet, he points out, such encounters dwindle when one chooses to enter the modern, more expensive Eurostars. Instead of cozy compartments where passengers face each other and converse, the zippy new trains hold rows upon rows of seats. Each one requires a reservation, so the traveler must plan ahead and forgoes the freedom to move near an attractive companion or away from an obnoxious one.

People pay more for the convenience of hurtling forward at speeds up to 250 mph, but can observe less scenery and see only the affluent. The possibilities for pleasant surprises diminish. Thus, the expensive new tracks that enable such miraculous speed have, ironically, lead to a duller experience.

Such changes reflect Italy’s bias toward the wealthy and its desire to project a modern European image. One site that demonstrates these values is the bustling main train station in Milan, where, from 1992 until recently, Mr. Parks has commuted to teach at a university. He describes the transformation of Milano Centrale, “the most monumental railway station in Western Europe,” into a glitzy, sprawling shopping mall, where it is easier to buy a new shirt than to buy a train ticket.

Such change, ironically, serves to maintain what passes as normal in Italy. The profits from leasing shops enable Trenitalia, the company that owns most of the trains, to keep low ticket prices, to retain too many people on the payrolls, and, above all, to strike a modern pose.

The rank persona of Berlusconi, of course, hovers over such a development. “[Y]ou really don’t need to think hard to see a connection between the rise to power of a man whose fortune has been made by creating a vast television and advertising empire and an Italy where one tries to resolve any and every contradiction between what people expect and what they are willing to pay for it by turning public services into advertising spaces and retail outlets,” observes Mr. Parks.

In contrast to the ramped-up modernity of Milan, the trains in Southern Italy provide a convivial but less convenient experience, all the while offering lovelier views of a land that continues to resist change. In the last of the book’s three sections, Mr. Parks defies bourgeois Italian expectations (again) by eschewing his car and instead, by riding the rails down to Sicily and then over to Calabria and, finally, to sparsely populated Puglia, in the southeastern tip of Italy.

In this un-air-conditioned world of rumbling old regional trains and friendly face-to-face compartments, Mr. Parks slows down. He really has no choice. The writer observes how trains bring Italians of all backgrounds together. “How privileged to be surrounded by all this life,” he notes.

As Tim Parks’ journeys reflect a gloriously imperfect, ever-evolving nation, they also provide readers with a clear-eyed companion worth keeping.