The Italian Table: Eating Together for Every Occasion 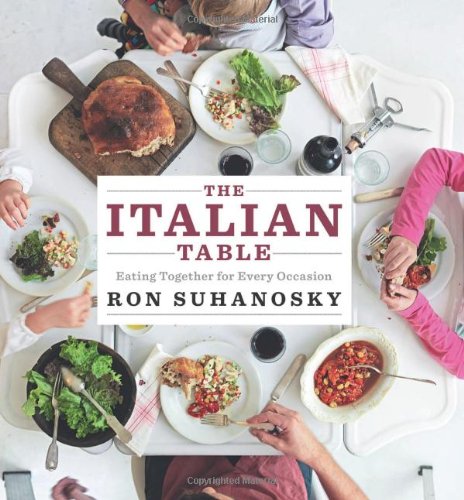 “There are so many head-scratching errors in the quantities, oven temperatures, and cooking times that you have to wonder if the book was proofed or the recipes tested before it went to print.”

With the cooking marathon that is Thanksgiving—and depending on how your guests behaved at the dinner table—you may or may not be ready to dip into a cookbook aimed at family dining. But if you are still in the mood to cook and remain on speaking terms with your family, then a cookbook that offers Italian-style family meals that will serve from four to twenty might be just the ticket. After all, post-Thanksgiving there is still an entire month left of holiday cooking.

On the surface, The Italian Table sounds promising. It is written by a young, successful chef with Italian roots (on his mother’s side) and two acclaimed Italian restaurants in Nantucket and Manhattan. As you would expect from a young successful chef, the recipes are based on Italian classics that have been updated for the modern, more sophisticated home cook.

Instead of eggplant parmigiana, Chef Suhanosky offers us Eggplant and Peach “Alla Parmigiana.” Osso Buco, which most of us know as veal shanks braised in wine and plum tomatoes, becomes Osso Buco in Red Wine with Root Vegetables that he serves with Pomegranate Risotto.

So with the promise of new and interesting recipes to please a crowd of friends or family, it is a real disappointment to discover that The Italian Table falls far short. There are so many head-scratching errors in the quantities, oven temperatures, and cooking times that you have to wonder if the book was proofed or the recipes tested before it went to print.

Take the Osso Buco, for example. If you have ever braised a piece of meat in your life, you are no doubt familiar with the concept of cooking a tough cut of meat at a low temperature in a little liquid for a long time in order to breakdown the collagen, or connective tissue, so that the meat is transformed into something so tender it almost melts in your mouth.

A standard oven temperature for most braises is 325º and certainly no higher than 350º. Chef Suhanosky’s recipe, however, calls for braising the veal shanks at 400º with so much liquid that what you are really creating is a boiled meat soup. The resulting sauce (if you want to call it that) is so thin it is more like a broth, and the meat, having cooked at 400º degrees for a mere hour (most braises take anywhere from 2 ½ to 3 hours of cooking time) was tough. In addition, the braising liquid was mostly water, which seems odd. If you want a complex braising sauce for your meat, water isn’t going to do it.

Surely this high temperature quick braising in a lot of liquid had to have been a mistake—it certainly tasted like one. But a look at his recipe for braised short ribs suggested otherwise—cook the short ribs in lots of liquid (again wine and water) at 400º for one hour. We now know how that will turn out.

The Shrimp Scampi with Pane Gratugiatta, Chickpea Purée, and Sautéed Escarole is equally perplexing. First, a translation of “pane gratugiatta” would have been helpful. Reading through the recipe you might think something is missing until you Google “pane gratugiatta” and find out that it means bread crumbs.

More importantly, however, pity the poor cook who slavishly follows a recipe to the letter. In this case, the recipe calls for cooking three pounds of shrimp (a lot of shrimp for four to six people) in a mere 4 teaspoons of butter that you are instructed to heat for four to six minutes. If you follow the directions without questioning this, you will be looking at a skillet of burned butter and not enough fat in which to cook all those shrimp (which just blew your weekly food budget).

That said, the shrimp paired with the chickpea purée was very good and a welcome change from rice. Again, though, you will have to rely on your own instincts and trial and error to get the purée the right consistency because the directions are inadequate.

When you run across errors like these in a cookbook, you begin to lose confidence in the whole book. These kind of mistakes are what make people afraid to cook, and it is what gives professional chefs writing cookbooks a bad name.

It doesn’t have to be this way. A little recipe testing, better editing, and more detailed instructions could have made The Italian Table a worthy addition to anyone’s cookbook collection. Instead, this is one to skip.