The Italian Executioners: The Genocide of the Jews of Italy 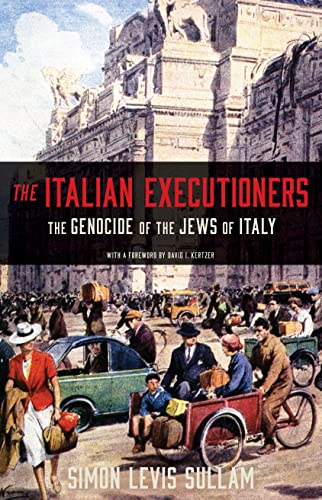 For the most part, what attention has been paid in the last 70 years to the events of the Holocaust in Italy has largely been a matter of the “good Italians” who protected, opposed, and/or actively resisted the Germans or assisted Jews in their efforts to avoid arrest, deportation, and extermination. There really hasn’t been much exploration or publicity when it comes to those who actively assisted the Germans in their nefarious “Final Solution.”

Postwar, many of those who did join with the Germans in this undertaking were not prosecuted, acquitted due to lack of evidence or mitigating circumstances, served minimal terms in prison, or had their sentences commuted after a relatively short period of time. Given Italy’s long history of Fascism and Axis partnership with Germany, it shouldn’t be surprising that there were many Italians with “dirty hands.”

This was particularly evident in the 20 or so months following Mussolini’s removal from power in the summer of 1943 and the establishment of a further Fascist “social republic” in northern Italy, through Germany’s sponsorship and support. It wasn’t really until this point that Jews were persecuted to the fullest extent in Italy in spite of racial, anti-Semitic laws passed in 1938 which placed many public, political, academic, and other restrictions on Jewish Italians.

As in Germany and the Greater Reich of occupied territories, the weight of persecution didn’t just involve arrest and deportation to the death and labor camps but also saw Italian Jews lose homes, clothes, furniture, money, and other valuables through outright extortion and confiscation by virtue of being classified as foreign enemies and subject to arrest.

From late 1943 until virtually the end of the war in the spring of 1945, Italian government leaders, Fascist party functionaries, police (military and otherwise), public security, and other agencies, working through census lists from prior years and with the help of informers and even one Jewish turncoat, led the hunt for Jews, many of whom did not survive their experience in the German concentration camp system.

Although this is a relatively short book of 142 pages of text, author Simon Levis Sullam has provided enough research, data and accounts to put the lie to the idea of the “good Italians,” though surely there were some, and has produced a serious indictment and revisionist history of Italy’s collaboration with Germany in committing genocide.

The contents of Sullam’s book recount the history of Italian “executioners” in the beginning of the persecutions; their seizure of Jewish property, arrests, and deportation of Jews in the cities of Venice, Florence, and Brescia; Jewish efforts to escape to neutral Switzerland; and informers and the effects and consequences of their acts in the context of the genocide.

Additionally, the first two chapters define the “ideological context of genocide” as well as its dynamics, to include “interpreting actions, motivations, and contexts.” Be forewarned. These two chapters are more in the nature of academic or scholarly language and extensive analysis and may be somewhat difficult for the average reader to assimilate. One needs to pay close attention to what is written here. Otherwise, this is a straightforward account of complicity in genocide.

The conclusion details the postwar amnesties and acquittals of those prosecuted for war crimes, memory repression of the survivors’ experience and their eventual oblivion as they tried to fit back into Italian society, return to a life of normalcy, and Italy tried to recover from the ravages of war.

Unfortunately, there is no photographic section. One wonders whether that was intentional or if there just weren’t any of relevance available for inclusion. Also, some maps of Italy showing the locations of the cities referenced and the established camps and prisons would have been helpful for purposes of information. A glossary defines and describes Italian terms employed and many of the agencies and organizations which were instrumental in complicity.

There is no formal bibliography yet the author did employ traditional footnote citations, using sources of primarily Italian origin by way of interviews, national and municipal archives, articles, reports, and other documents to substantiate this particular history of genocide.

As unfortunate as it is that many Italians escaped true postwar justice for their crimes, at the very least their horrific acts are here for all to see. It’s another reason to be informed and commit to preventing genocide in all its iterations.