Isle of Blood and Stone 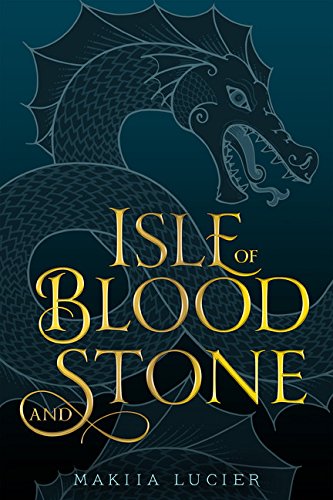 “a tale of choices made because of love”

Eighteen years before, in the kingdom of St. John del Mar, Lord Antoni, the Royal Navigator, decides to take seven-year-old Prince Bartolome and his five-year-old brother Teodor on an outing to the place where the magnetic landing stones used in compasses are found. Accompanying them are their nurse, Lady Esma, and 20 of the king’s royal guard. A picnic is served, and everything turns into a nightmare.

“Soldiers and servants fell, one by one. Antoni saw Bartolome at the far side of the meadow. The prince knelt with his brother in his arms, looking directly at Antoni and crying for help. Antoni raced across the meadow. Shock sped his feet, along with a terrible, hideous fear.”

The wine has been poisoned, and in minutes, all the guards are dead. Antoni, the princes, and Lady Esma are never seen again. A soldier’s confession lays the blame at the king of Mondrago’s door and the grief-stricken del Marian monarch wages war, wiping out the royal family and laying waste to the Mondragan kingdom. The king’s third son, only a year old, becomes the heir to the throne, and Antoni’s own child, the same age, is left half-orphaned.

Now Elias is a royal mapmaker like his father, and his best friend Ulises, is the king. Ulises has only one other relative left alive, his cousin Mercedes, alternately reviled and tolerated by the people because her mother was Mondragan. Mercedes, however, is indispensible to her cousin because she’s very good at ferreting out facts. She’s precious to Elias for other reasons.

Mercedes has now brought a mystery to the king, and Ulises relays it to Elias. Two maps have been found, made only ten years earlier, and they both bear the workmanship and markings of his father’s hand. Ulises wants Elias to discover the maps’ origins and perhaps at last what happened to his brothers and Elias’ father.

Elias is hesitant for personal reasons. His mother has remarried, to a man who has been a good stepfather to Elias. If by some quirk of Fate, he discovers his real father alive, his mother will be a bigamist and his half brothers and sisters illegitimate. Can he do that to those he loves?

Ulises, however, is adamant.

“‘How can I look at these maps, see this riddle, and do nothing? They are my brothers.’

Elias reached across the table and flicked aside the shells with a fingertip. The map curled into itself. ‘It’s bound to be a goose chase. You know that?’

‘Or a treasure hunt,’ Ulises countered, ‘and you’ve always been good at those.’”

Elias is more than good, for he will find the answer to the riddle. He’ll do a great deal of detecting and sifting through the history of the crime, as well as searching through his own memory. His interpretation of the clues visible in the two maps takes him on a perilous journey of discovery. It will cost lives, and much pain and grief on his part, as well as for Mercedes and the king.

Eventually, he’ll discover not only what happened to Bartolome and Teodor, but Lord Antoni as well. He’ll unveil the mind behind the plot is the least suspected, and the reason for all the deaths unbelievable. Choices will be made for the welfare of all involved, and it won’t be easy.

This is an entertaining mystery story with a faraway setting. Though the sentences are filled with color and plenty of description, they are simply written, making this novel an easy read. The world of St. John del Mar is given life and depth, while obversely there is less detail of how the main characters looks (Mercedes is green-eyed and freckled, her black hair hangs to her waist; Elias has rich brown hair and generally sports bruises from various mis-encounters; Ulises is dark-haired, melancholy-looking, and wears black). This allows the reader to utilize his imagination, making personal assumptions of their appearance.

Isle of Blood and Stone is a tale of choices made because of love—of fathers’ love for their sons, of a misguided desire for revenge, and of the decisions one must make to protect those innocent who will be affected. Justice to the villain is cruel in accordance with the somewhat Renaissance tone of the setting, but in the same vein, ironically appropriate. The ending is a bit sad, making the reader wish there could be a more satisfactory solution, though within it resonates the sound of hope.

“Elias looked to Mercedes and found her eyes on him, the hint of a smile about her lips. A new adventure. For both of them.”

Lucier has written a lovely mystery and an enchanting romance. Though this novel is listed for ages 12 and up, adults will also find it entertaining. Indeed, some may actually think so often of it while going about their daily chores, they’ll be eager to get back to that next chapter.