The Canary Islands: A Cultural History 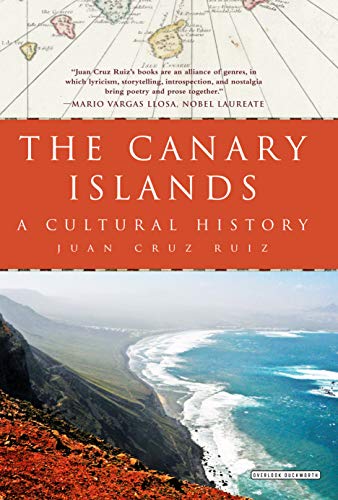 The Canary Islands: A Cultural History is anything but a traditional guidebook. It is rather a fusion of literature, history and travel sure to prove both useful and inspiring. Through the eyes of author Juan Cruz Ruiz, this beautifully written book translated from the Spanish by James Womack explores the Canaries’ rich archipelago, its native cuisine, unique history, mythology, and cherished ecology.

Be it the beaches, forests, Carnival, the local art, or simply the somnolence of the islands, Cruz acts as a personal tour guide of sorts weaving in anecdotes, writings, and commentary from people with a deep connection to  life there. The result is a happy discovery of the true essence of this culturally vibrant destination.

This is a sentimental journey for Cruz, an extremely personal one. The author admits how difficult it is to compress into a single journey, a single point of view the whole extent of such a fragmented world. So off he goes, talking us along to all of the islands, on a complex a pilgrim in his own land in search of “an ever-changing horizon which appears and disappears.”

Drawing insights from the Basque writer Ignacio Aldecoa who traveled to the Canaries some 60 years ago in search of what he had been told was “paradise,” Cruz sets off to rediscover the terrain Aldecoa had covered, keen to lose himself in the landscape of the islands.

This Spanish archipelago off the coast of northwestern Africa are rugged volcanic isles known for their black-and-white–sand beaches. Tenerife, the largest island, is dominated by the sometimes-snowy active volcano Mt. Teide, which has its own astronomical observatory and is part of Teide National Park. Tenerife hosts a huge pre-Lent Carnival in the capital, Santa Cruz de Tenerife. The main islands are (from largest to smallest) Tenerife, Fuerteventura, Gran Canaria, Lanzarote, La Palma, La Gomera and El Hierro.

While these islands were occupied by Romans, Spaniards, Genovese, and French, the first settlers came to the Canaries from Africa, “the amputees of a rebellion,” writes Ruiz. They lived through famines, the Fascist rise of Franco, waves of emigration, tourism, civil war, World War II, and democracy.

Ruiz is intent on seeing “all the primeval spaces of my Canary Island memory . . . the almost religious expressiveness of the mountains, which in the  distance seem to be temples or figures brought over from legends.”

He feels a “strange symphony of cliffs, crags, valleys and palm trees . . . feeling the “wind, diluted, something that adds a melancholic gust to the music of the southern islands.” He revels in the poetry of the islands, in their spirit of sadness and joy, the folklore, the shade of an Indian laurel, “the truth that comes from the sky, just as the island did.”

The Canaries have played a bigger role in our lives than we realize: Agatha Christie used them as a strategic background for some of her mysteries, as did Jules Verne; Shakespeare had heard of the wine made there; Garcia Marques knew of the Canarian birds; the Canaries were Christopher Columbus’ first pit stop in 1492.

Ruiz tell us the fate of other travelers to these faraway lands: explorer Humboldt took note of some 460 distinct botanic species on just one island; the surrealist Andre Breton washed his hands “‘with common soap that looks like lapis lazuli.” Neruda came, so did Churchill, Unamuno, Bertrand Russell, Samuel Beckett, even Oscar Wilde’s father.

“There are thistles here, tomatoes, cactus pears; a cross made from thistles remembers someone who died in a car accident. It is common in these areas to makes these memorial crosses out of the wildest variety of materials, and this gives the sides of the road a ghostly atmosphere of memory and sadness. And the islands thin themselves are melancholy; the series of crosses turn them into a physical geography on which thee sorrow of bereavement becomes a persistent shadow, impossible to forget.”

We often find touches of magical realism throughout this book that hint of a homage to Gabriel García Márquez:

“Old houses, silence, banana trees, the spit reaching to the sea. Hermigua is a series of symbols . . . a metaphor for all the islands. Poor but self-sufficient, standing firm against hunger, protected by the forest of beauty . . . the milky water violently caressing perfect rocks, almost prehistoric . . . the imperious randomness of perfection.”

Like Márquez, Ruiz manages to achieve the rare feat of being accessible to the common reader while satisfying the most demanding of sophisticated critics. The book is many things: nostalgic, lyrical, melancholy, and jubilant . . . Cruz’s brushstrokes are masterful. One of his lasting messages that distills the motto of the island: “Don’t be in a hurry to die. Patience keeps you alive. Look at the sea. It never gets old. The sea’s patience is infinite.”