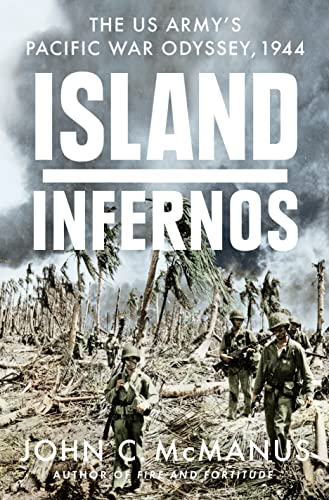 “a marvelous middle volume of this trilogy, picking up the narrative seamlessly and handing off to what promises to be a stirring conclusion to the war . . .”

Critically acclaimed historian John McManus continues his trilogy of the US Army in the Pacific War, covering the increasingly bloody and challenging battles of 1944 as the strategic tide of the war moves in America’s direction. When his previous volume ended, the army had achieved its first major victories over the Japanese Army on the island of New Guinea, the Solomon Islands, the Aleutian Islands, and the Central Pacific. Now in 1944, with the full might of American industry mobilized and the Army increasing in size and capability, the hard lessons from these campaigns are applied.

As the author notes, by 1944, the army had actually begun to dwarf the more publicized role of US Marine Corps, contributing almost three times as many divisions and fighting in nearly every corner of the Asiatic theater. Beginning with the Marshall Islands campaign in the Central Pacific, the growing strength of America combined arms to both move and sustain larger invasion forces, allowing both American Theater commanders, General Douglas MacArthur and Admiral Chester Nimitz, to undertake more risky amphibious operations, bypassing strong Japanese garrisons such as Rabaul in the South Pacific and Truk in the Caroline Islands to seize relatively less defended islands to establish air bases and naval anchorages. The ability of the American forces to conduct these “island-hopping” campaigns provided a means to reduce combat casualties and attempt to isolate the large Japanese garrisons into irrelevance.

Throughout most of this year the army’s primary focus remained the island of New Guinea, where the availability of shipping and superior airpower fed General MacArthur’s intense desire to get American forces back to the Philippines via a daring series of plans to leapfrog along the northern cost of the island, bypassing large groups of Japanese soldiers who were basically left to starve in the jungle when their logistics routes were cut by American airpower.

Many readers may be surprised to learn how deeply the American army was involved on the mainland of Asia, fighting in the jungles of Burma in an incredible deep interdiction raid that would see an American infantry unit composed of cast-offs and misfits fight in some of the most formidable terrain of the war to achieve a nearly impossible mission of capturing and holding an airfield deep behind Japanese lines, fighting until their original unit was nearly dissipated. This theater, where American soldiers fought side-by-side with Chinese Nationalist troops against the Japanese has been long neglected in the tales of World War 2 and McManus does a tremendous job of capturing the byzantine combination of soldering and politics involved in the Southeast Asia theater, particularly its acerbic commander General Joseph “Vinegar Joe” Stilwell.

Toward the end of the year, as America achieved a global dominance never to been seen again, the army at last allowed MacArthur to complete his pledge to return to the Philippines with an invasion of the island of Leyte, where the Americans encountered a vigorous and relentless Japanese resistance as the Japanese command realized the threat an American liberation of the country portended to the overall strategic balance of the war. As this volume concludes, the American Army had overcome most Japanese resistance on the island, while realizing that even tougher campaigns await in 1945 as the American war machine drove relentlessly toward the Japanese home islands.

Of course, any story of the Pacific War is dominated by the interactions of politics and personalities of some of the army’s most famous commanders. McManus offers a balanced but unvarnished look at Douglas MacArthur, one of the great figures of the war, with an ego larger than his considerable intellect, and he brings to life some of the Army’s finer, but lesser known World War II generals like Walter Krueger and Robert Eichelberger, who were superb combat commanders, but have been historically overshadowed by MacArthur’s legendary disdain for sharing glory or credit for military victory.

The politics and inter-service friction of the Pacific Theater often simmered under the surface, and occasionally boiled over into the public eye, most notably during the campaign to capture the Marianas Islands to establish the first island bases for the new American B-29 bombers intended to finally strike the Japanese homeland. The controversy over the firing of an army division commander by a Marine Corps commander under the authority of two navy admirals set off a potential firestorm between the army and navy, and left a deep rift that required the personal intervention of General George Marshall and Admiral Ernest J. King to resolve. McManus takes a very hard line on the temperament and decision-making process of Marine General Holland Smith, pointing to his deep prejudices against the army that eventually got him removed from any further combat command in the war.

This is a marvelous middle volume of this trilogy, picking up the narrative seamlessly and handing off to what promises to be a stirring conclusion to the war as the army really begins to dominate much of the land combat in this theater.