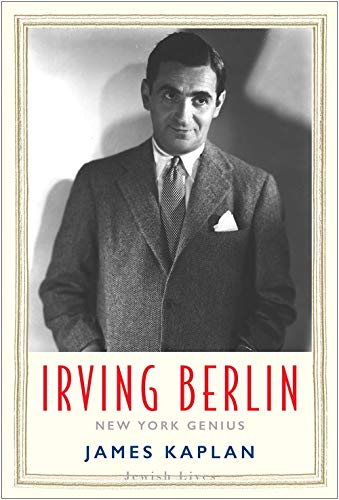 “One senses on every page Kaplan’s enthusiasm for his subject as well as his deep knowledge.”

A Jewish émigré from Tsarist Russia to the poor, teeming Lower East Side of Manhattan, young Izzy Baline left home at 13 to support himself on the streets. He started as a paperboy but soon was singing in bars for the coins the customers threw at him.

With a friend, he started writing ethnic novelty songs (some a bit racy), like “Marie from Sunny Italy,” and caught the eye of a music publisher who hired him as a song plugger.

His first big hit, “Alexander’s Ragtime Band” (1911), was an international sensation. The secret to getting rich as a composer was (still is), owning the rights to one’s songs. Within a few years, Berlin owned his own music publishing house.

By his mid-20s, he was quite wealthy. In 1921, he opened his own Broadway theatre, the Music Box Theatre, to house the revues that featured his music. Radio and recordings made Berlin even more famous.

Hollywood called in the 1930s and Berlin created great scores for the Astaire-Rogers classics Top Hat and Follow the Fleet, before he moved on to Paramount to create vehicles for Bing Crosby. After World War II, Berlin created two big Broadway hits for Ethel Merman, Annie Get Your Gun and Call Me Madam, both later adapted for the screen. By then MGM and Paramount were creating major musicals from Berlin’s previous hits.

All this success went to an enormously gifted man with almost no musical training. Berlin had a famous special piano that could change keys with the twist of a lever. He usually dictated his tunes to a musical secretary who would write them out and harmonize them. English was his second language but he was a master lyricist.

Berlin was deeply in love with his adopted country. “God Bless America,” which he wrote for radio star Kate Smith, became a patriotic classic. Berlin spent much of World Wars I and II entertaining the troops with his famous number, “Oh How I Hate to Get Up in the Morning.”

Berlin’s star waned in the last two decades of his life as rock and roll dominated the music industry. For a while, Berlin’s work sounded too old fashioned. His last Broadway musical, Mr. President (1962), was a failure. He died in 1989 at 101 years old.

There have been a number of biographies of Irving Berlin beginning with his friend Alexander Woolcott’s work in the 1920s. James Kaplan’s book, part of the Yale University Press’s Jewish Lives series, builds on past work and benefits from Kaplan’s research in the Irving Berlin Archives at the Library of Congress. Kaplan is interested in Berlin as composer-lyricist and as show business titan. Berlin was considered one of the shrewdest businessmen in a highly competitive industry. Raised in poverty, money was important to him.

Kaplan also chronicles Berlin’s 65-year marriage to Ellin Mackay Berlin. Berlin’s first wife died shortly after their marriage. He met Ellin in 1924 and had to overcome a great deal of resistance from her aristocratic Catholic parents before they could wed. Unlike womanizing Richard Rodgers or Cole Porter who had a penchant for extramarital trysts with young men, Berlin was a faithful husband and father. If he strayed from home, it was only to devote himself fully to a project.

Kaplan’s book is well-documented and written in an enjoyable, conversational style. One senses on every page Kaplan’s enthusiasm for his subject as well as his deep knowledge. This is the best introduction to Berlin’s life and work.