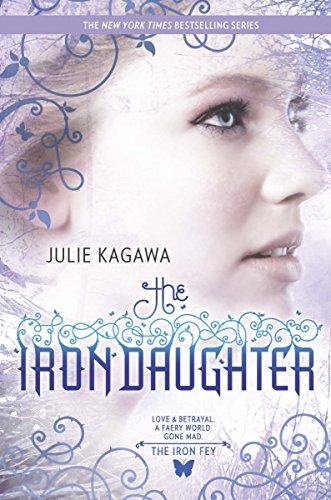 As the highly anticipated second book in the wildly popular Iron Fey series, The Iron Daughter continues the journey of Meghan Chase; half human, half faery royalty, she is also just a young girl of only sixteen forced into a world she once could only have imagined in her nightmares.

Daughter to King Oberon and best friend to Robin “Puck” Goodfellow, Meghan has learned that sometimes what you read in fairy tales may not be fiction at all, it may be your reality. Now as she has chosen to reside in the Nevernever land and embrace her faery self, she must now face not only her love for Ash, the forbidden Winter Prince, but also his mother, the Queen of the Winter Court.

After defeating the Iron King and returning her little brother Ethan to the human world in the first book of the series, Meghan must now pay her debt to the Winter Prince and return with him to the Winter Court where she could face imprisonment or even a torture worse than death from the ruthless Queen Mab. Missing the guidance and protection of her closest friend Puck, she must trust herself to be able to survive surrounded by enemies despite the loss of her fey powers.

Soon the threat of the Iron Fey is once again upon the faery world, and Meghan seems to be the one of the only fey aware of their existence. War looms between the Winter and Summer courts as Meghan once again goes to battle to save a world she has only begun to know.

Filled with magical creatures and an action packed plot, The Iron Daughter is the perfect continuation of The Iron King. Engrossing and expertly paced, the series is a wonderful fairy tale with the feel of an old world story gone modern.

Shakespearean references weave perfectly into the story of a modern day teenage girl in the midst of a wonderland. While entertaining her readers and leading them on a story not to be forgotten, Kagawa will also hopefully lead some of her teen readers back to classical literature through this entrancing fantasy series.

The Iron Daughter is a book that will keep its readers glued to the pages until the very end.