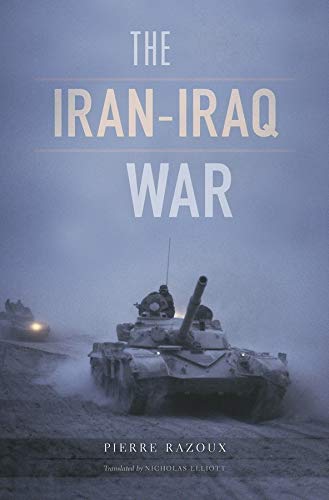 Although it was the longest war of the 20th century and caused over a million casualties, the Iran-Iraq War is largely forgotten by the Western world outside of a few military analysts and Middle East scholars. This is unfortunate, as the effects of this war are still being felt in the Middle East and Persian Gulf, from the continuing Sunni-Shia clashes in Syria and Iraq to the Iranian nuclear program.

It would not be too far-fetched to say that this war directly lead to America's over 30 years of military involvement in the region, from fighting a proxy naval war with Iran to the 20 years of war, cold war, and occupation of Iraq.

In spite of the ramifications of this war, a complete and readable single volume narrative has not been written in the West, until now. Mr. Razoux, the Research Director at France's Strategic Research Institute of the Military School has written a comprehensive and engrossing account of this war.

Using a wealth of new or untapped sources, including the complete set of transcripts of the American debriefing of Saddam Hussein after his capture in 2004 and numerous interviews with Iranian and Iraqi commanders, Razoux provides unique insights into the strategic and operational thinking of both sides throughout the war.

This volume combines the best aspects of narrative history and strategic analysis, beginning with the origins of both the Iraqi Baath Party and the Iranian theocracy.

The implacable personalities of Saddam Hussein and Ayatollah Khomeini, combined with the geo-strategic tensions arising from disputes over critical strategic waterways and oilfields, made war all but inevitable in the wake of the Iranian Revolution of 1979.

From a military perspective, this war was amazingly diverse, with sweeping tank battles, bloody urban combat, massive aerial duels, and even naval combat. The combatants showed a surprising amount of skill and ingenuity, specifically the Iranians, who were in a particularly weak position militarily at the start of the war due to massive purges of the regular military by the new Shia theocracy.

Once the war began, the Iranian military was eager to show their loyalty to the new regime and quickly got the upper hand in early naval and air engagements, inflicting serious losses on Iraqi forces.

The Iraqi military also showed some tactical skill, but like all dictators, Saddam kept his military leadership on a short leash to prevent a coup, and there were several lost opportunities to inflict major defeats on the Iranians because Iraqi generals were loath to show too much initiative.

However, neither side anticipated or prepared for a long war, and once the initial maneuver phase of the war ended, it became a more static war of attrition that Saddam could not end and the Iranians could not win.

The war descended into a strange combination of World War I style trench warfare along most of the battle front combined with high-tech modern warfare as both sides sought to use ballistic missiles to attack their opponent’s cities and oil production facilities and jet fighters firing long-range missiles to attack oil tankers in the Persian Gulf in an attempt to cripple their opponent's economy.

What makes this book so useful to both military historians and students of Middle Eastern politics is that Razoux is able to incorporate a complete look at the ripples caused by this conflict throughout the Middle East and within the Cold War as a whole.

The rise of Shia militancy in Lebanon, leading to the arms-for-hostages crisis of the Reagan Administration, the influence of Israel in the conflict, and the ultimate involvement of the U.S. Navy in the so-called “Tanker War” leading to the biggest American naval battle since World War II are all detailed in this book.

Razoux then concludes the book with an insightful analysis of how the conflict has been the genesis of most of the subsequent crisis and conflicts in the region, from Saddam's invasion of Kuwait to the Iranian nuclear program to the current Shia-Sunni internecine conflicts raging across the region.

The book also includes a number of detailed appendices listing both countries’ orders-of-battle, the major arms shipments and foreign aid received by both countries, and a host of other statistics and information.

There is almost nothing occurring in the Middle East today that wasn't somehow influenced by this virtually unknown war. It has been long overdue for a comprehensive single-volume history, which this book ably fulfills. This is definitely a volume that both military historians and Middle Eastern scholars should have on their bookshelf.