By Invitation Only: How We Built Gilt and Changed the Way Millions Shop 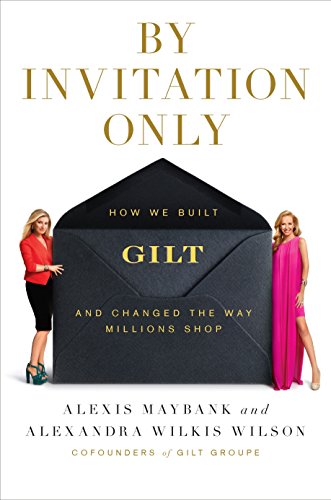 “This extraordinary book deserves the widest of readership by everyone interested in retail, entrepreneurship, innovation, strategy—and, of course, getting a good deal.”

The story of building Gilt, the company name blending luxury and guilty self-indulgence—is the confluence and successful implementation of several phenomena:

The two As, as they came to be known to the fashionista set, were ideally positioned to implement their strategy, being both the target customers for their offer and possessing unique, singularly appropriate, highly complementary skill sets.

In implementing their business, which rocketed to phenomenal volume and great success, the pair and their colleagues needed to make three critical sales: to team members to join them in their entrepreneurial venture, to luxury brands to make their merchandise available through the Gilt system, and to customers to buy what they offered.

The genius for Gilt starts with the New York sample sale, whose indignities include “sweaty, co-ed, communal dressing rooms, . . . insufficient access to mirrors . . . surly, overwhelmed employees” and fighting “for the best merchandise with otherwise well-manner women driven to greed and insanity by the whole experience.”

Notwithstanding all of this, the two As report “we—along with so many other fashion-loving women we knew, kept coming back for more. We even found it kind-of fun. . . . emerging with a great designer piece made the abuse worth it. Finding that same bargain on a sale rack in a dignified department store where no one else was reaching for it? We had to admit, that wouldn’t have been nearly as exciting. Sample sales gave us a rush; they were a game we were addicted to winning.”

The essence of the Gilt business model is taking the experience just described online, disabusing the physical pushing and pulling aspects of the fighting for merchandise, dramatically expanding the quality of what was on offer, and enabling people—initially women and ultimately everyone—to participate in the special inside process, irrespective of where they might be located.

Essential to building the business, was the personal connection between the As and their customers, which extended to their wanting “to create and sense of personal connection that is too often lost on line. We wanted to personalize our business and to make customers feel that we were the ones curating the sales . . . we included in each Gilt package a note (written in gold script) thanking our member for his or her purchase and signed, Alexis & Alexandra, the Founders.

“The more we put ourselves out there, the more members felt personally connected to the company. We became almost proxies for the brand—two friends with insider access to deals and tips.”

This book combines revealing backstories about how the five members founded, created, and built the Gilt Groupe. The critical importance of relationships— between the two As, the five founding partners, and their customers—is a central theme in the story.

Their success derived from relentless networking, unconstrained chutzpah, disciplined execution, an unwavering focus on team/team/team, and balancing integrity with the demands of an aggressive, often cutthroat industry.

The roles of different players, including those of the two As, evolved, morphed, reshaped, and redirected over time as the business expanded and exponentially grew. One of the most instructive lessons of the story of Gilt Groupe is the capacity of key players to move from role to role, prioritizing what needed to be done in the business over personal power agendas.

Gilt Groupe personifies the gamification of retailing. Today, the company has 1,000 employees, conducts 22 sales daily involving some 6,000 brands to some 5 million members, some three quarters of whom heard about Gilt from their friends. Indicative of the shift to mobile in the overall society and commerce, 17% percent of the transactions on week days and 30% on weekends are on mobile.

All of this is supported by robust robot-based logistic systems, shipping 10,000 plus packages per day, involving tracking some 200,000 concurrent customer orders.

By Invitation Only is destined to be acknowledged as a classic in many realms: retail innovation, business partnership, partnerships and relationships, creative destruction, and business strategy. This extraordinary book deserves the widest of readership by everyone interested in retail, entrepreneurship, innovation, strategy—and, of course, getting a good deal.