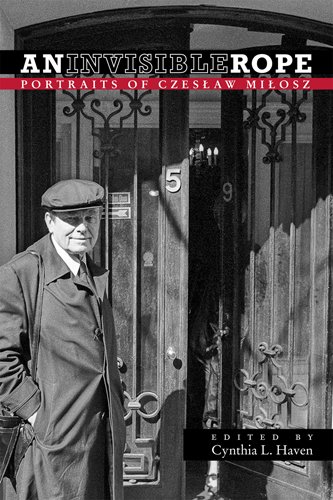 I first met Czeslaw Milosz’s work as an undergraduate, majoring in history with an emphasis on Russia and Eastern Europe. A professor assigned Milosz’s The Captive Mind, and the book quickly became one of the most informing books I have ever read.

The Captive Mind took the reader’s way of thinking and turned it inside out, describing biting tragedy and the subtle persistence of resistance and hope. Framed by the myth of the Murti Bing pill and Ketman, the method of acceptance of that which is unacceptable, The Captive Mind follows four authors in post-World War II Poland through the intolerable totalitarian regime writers and poets tried to resolve themselves to.

However, this isn’t a review of The Captive Mind or Milosz’s writing in general—it is a review of how people remember Czeslaw Milosz.

Cynthia Haven’s An Invisible Rope: Portraits of Czeslaw Milosz brings together essays and stories from 33 authors and friends of Milosz to give the reader a picture of the man behind The Captive Mind and numerous poetry collections.

Through their words, the reader gains a finer appreciation for a writer who grappled with the idea of “Poland” and “Catholic” and how to make sense of his years in “exile” in America, having defected from Poland. The reader comes to see a writer full of quiet dignity, a professor at Berkeley who taught traditions of Polish literature, and the raw emotion of poet who composed “Orpheus and Eurydice” after the unexpected death of his second wife.

After reading Milosz, one cannot but be caught up in his dualism—left wondering if the “hope” left in Pandora’s box by the gods is a sublime promise for the human condition or the greatest punishment that the Greek gods could inflict on mortals.

Perhaps the most interesting aspect of Milosz that comes through the collection of essays and sketches is the quality of empathy (“He Also Knew How to Be Gracious”). Milosz understood that people make decisions based on their contexts—a poignant reminder that people and contexts exist in relative terms. He is, simultaneously, real and allegorical to modern audiences. Most interestingly of all, as noted by many authors, Milosz abhorred the use of irony. Irony was to Milosz’s thinking a tool for the lazy intellectual. It does not require as much intellectual heft to tear down ideas and writings as it does to build them up.

An Invisible Rope leaves the reader with a portrait of a man—a thinker and a humanist—who, through his writing and poetry, asks people to live more purposefully in the world and believes that people can. A man who, by all historical rights and contexts could have been completely justified in turning his back on humanity and churning out bilious contempt for the human condition. Rather, the portrait of the man created in The Invisible Rope shows a curious juxtaposition of Odysseus and the Prodigal Son. Milosz returns to Poland, his Ithaca, at the end of a long and lonely exile. In returning to Poland, he tries to make sense of his country, its nationalism, and its religion that have been the informing triple point balance for his life and work.

Ms. Haven’s compilation of sketches paints a strong portrait of Czeslaw Milosz and his life. Truly, the reader is left better knowing the poet who penned, “Endurance comes only from enduring/With a flick of the wrist I fashioned an invisible rope/And climbed it and it held me.”