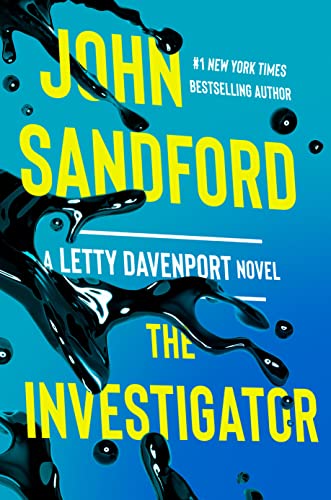 One of the best things about John Sandford’s long-running Prey series is the growth of the characters readers have bonded with during the course of 30+ books. He’s created a successful spinoff series with one of these characters, Virgil Flowers, and is replicating success by following another familiar face in The Investigator.

Introduced as a child in 2003, Letty grows up through the Prey novels and is eventually adopted by the main character, Lucas Davenport, and his wife. The Investigator intersperses events from her childhood, especially when she first meets Lucas, to catch up readers who may be unfamiliar with her beginnings.

She is now a grown woman in her 20s, moving on to create her own life in Washington, D.C. There are frequent references to her father, which makes sense, as he is a big deal in the world she’s trying to break into, but he doesn’t actually appear in The Investigator, giving Letty room to shine on her own.

She is working for a senator and hasn’t found much to intrigue her in the capitol, but when she tries to turn in her resignation, the senator proposes an offer that will give her more freedom. Her first task is sniffing around some missing oil in West Texas.

Letty’s scenes are interspersed with those from viewpoints of the villains, giving the reader insight into their motivations, but leaving them in suspense for how the situation is going to resolve. The oil is being stolen by a group of extreme right wingers, who are planning to sell it on the black market and use the funds for an act of domestic terrorism, and Sandford does an admirable job exploring their backgrounds and fleshing them out as people and not just stereotypes.

One of the perks that comes with Letty’s new job is a carry permit—being raised around guns, she has an affinity for them and even describes herself as a gun nut. On a visit to a gun range, she meets ex-Army master sergeant John Kaiser, and quashes his doubts about her to impress him with her skill and poise. Though Kaiser starts out being a little antagonistic, Sandford turns him into a likable character, and a great foil for Letty.

The two head for Texas, more concerned with where the money from the oil siphoning is going, rather than making a bust. Fairly early in their investigation, they’re proven correct that something bigger is going on when they find two bodies. Their situation only gets more dangerous from there, escalating to an emotional and surprising final.

Letty and Kaiser’s pairing is consistently one of the best parts of the book—he is open to learning from her, and Sandford makes it a point several times to give the reader a glimpse inside her mind as she considers just how valuable it is for her to get to learn from someone with the kind of experience that he has.

Though Letty seems like a little too much of a chip off the old block—she’s very similar to her adopted father (mostly by design, it seems)—she does seem to have room to become her own character in subsequent books. So much of Sandford’s characters’ personalities are formed through their experiences, and it’s safe to assume that Letty evolves beyond the stoic, smart and tough “daughter of Lucas Davenport.”

Some readers may not enjoy Letty’s personality as she can be dry and a bit abrasive, and there were times that it felt obvious that an older man was writing a younger female character, but her seeming coldness was very skillfully written to be surface level. She cares about people but doesn’t let that stand in the way of getting the job done.

Ellen Whitfield's book reviews and author interviews have previously appeared in the Louisiana newspaper, The Advocate. She is currently Publicity Director of the book marketing firm Books Forward.