The Invention of Yesterday: A 50,000-Year History of Human Culture, Conflict, and Connection 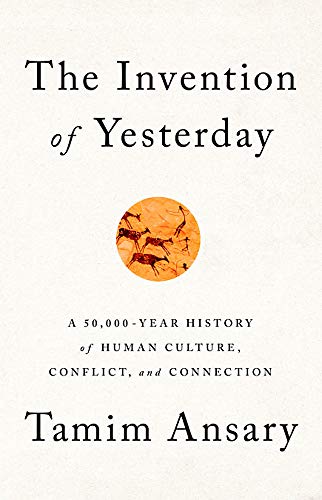 “The Invention of Yesterday is a solid read for anyone curious about how the connections between human cultures have shaped the narrative of our history as a species.”

“Meta-history” books are having a moment. Writers from a variety of disciplines and perspectives have attempted to provide a “big picture” look at the long arc of human history. Building on the success of books like Jared Diamond’s Germs, Guns, and Steel: The Fates of Human Societies, more recent entries include Sapiens: A Brief History of Humankind by historian Yuval Harari, A Short History of Nearly Everything by Bill Bryson, Origins: How the Earth Shaped Human History by science communication expert Lewis Darnell, and others.

One of the latest contributions to this popular genre is The Invention of Yesterday: A 50,000-Year History of Human Culture, Conflict, and Connection by bestselling author Tamim Ansary. The lens through which Ansary tells the story of human history is that of connection, specifically, how the major developments in human history are driven by what happens when different groups of humans encounter one another. In most cases, there’s some degree of conflict and almost certainly an exchange of ideas and culture.

In Ansary’s telling, these human encounters and their outcomes are influenced by, and in turn influence, our species’ “braid of history” that has three key intertwined parts (he coins the term “trialectic”): language and communication, tools and technology, and our interaction with the natural environment.

The book’s narrative begins with the emergence of primates who can make art, somewhere around 50,000 years ago. These developments facilitated the first human civilizations to develop, usually centered around major rivers: the Nile, Tigris and Euphrates, Indus, Huang He, etc. Over time these civilizations begin to trade with one another and the connections and exchanges of ideas, culture, technology, etc. weave the braid of history through tools, language, and the natural environment.

In the second section, Ansary describes how humanity next began to inhabit “one planet,” but in many “different worlds.” That is, each major civilization viewed itself as the center of the cosmos. To the extent that there were other humans in the world, they were peripheral to where the important action was taking place (e.g. the Roman Empire, the Han Dynasty etc.). This pattern continued as the geographical concentration of the world’s powerful civilizations gradually shifted from east to west starting about 2,000 years ago.

The third section of the book identifies “history’s hinge” as 1492 when Columbus set off into the Atlantic looking for a new trade route with Asia. “From the standpoint of interconnectedness and the emergence of a global human story . . . the changes set in motion by Columbus justify calling 1492 the year that divides all of history into before and after” because they “punched a hole between the two hemispheres, opening a flood of traffic.”

From there the narrative proceeds much as one might expect: the rise of Europe as a world power, colonization, trade, and capitalism, the industrial revolution and machines, the discovery and harnessing of electricity, World Wars, etc.

Returning to the organizing theme of the book, Ansary sees humanity’s present moment as framed by language and communication (now enhanced with the internet and instantaneous global communication abilities) tools and technology (we now have the ability to destroy the planet with nuclear weapons and potentially control our own evolutionary process with gene editing), and our interactions with the natural environment (the fast-approaching reckoning with climate change).

One of the strengths of The Invention of Yesterday is how it contextualizes discrete events that are often discussed in isolation. Ansary continually places these events within the push and pull of wider historical forces to show how they fit within his analytical trialectic of tools, environment, and language.

In terms of style and prose, the book often reads much like a compendium of conversational encyclopedia entries linked together by the book’s trialectic narrative. The chapters are short and succinct. The author aims for breadth over depth and summary over detailed analysis. Often explanations are framed succinctly (e.g. “this civilization survived for this reason, but this civilization didn’t for that reason.”). Each historical period devotes a few pages to the highlights from the world’s major geographical areas: alternatively Asia, Africa, Europe, the Americas. The author’s sources are provided in an extended bibliography at the end rather than referenced throughout the text. It would make for an effective alternative to traditional academic texts in world history university survey courses or perhaps advanced placement high school world history courses.

The Invention of Yesterday is a solid read for anyone curious about how the connections between human cultures have shaped the narrative of our history as a species.