Inventing a Christian America: The Myth of the Religious Founding 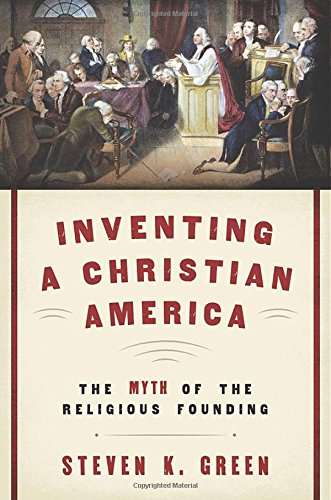 “makes a definite contribution to understanding religious liberty . . . and the thinking of our Founding Fathers on the role of religion and politics . . .”

The relationship between religion, politics, and public policy has always been contentious in America. The debate over what constitutes “separation of church and state” will likely continue as long as various politicians and their supporters use faith and religion to argue for or against certain political viewpoints.

Is America a Christian nation? What role did religious faith and morals play in our founding documents? What did our Founding Fathers think about the intercourse of Christianity and politics? These are the questions that Stephen K. Green wades into with this book, using his extensive background in legal and historical research.

His basic thesis is that although the Founding Fathers had various levels of religious faith for a variety of backgrounds, they were all basically agreed that the colonies which became the United States should have no recognized religion and that the influence of churches should be separated from running the government.

He uses collected quotes and writings of various founders to begin his argument, spending a great deal of print expressing the need for context to understand the intent of many quotes, while simultaneously criticizing the same use of quotes from other pro-Christian viewpoint historians. This is not the most convincing side of his argument, as it is very difficult to discern the exact intent of the authors and speakers beyond all doubt.

Using his legal background, he is on firming footing with a cogent and convincing analysis of one of the more understudied clauses of the Constitution, the No Religious Test Clause found in Article VI, Paragraph 3.

This was the most interesting part of the book, since most of the church-state debate centers on the Establishment Clause found in the Bill of Rights. Laying out an “original intent” argument of why this clause was included in the Constitution and why it was so important to the document's authors is a fascinating and well done legal brief.

One particular factor in the inter-denominational feuds among the colonists, and one of the greatest issues the colonists had with “official” or state sanctioned denominations, was a simple matter of taxation. The Church of England, as the official church of the Crown, was supported by public taxes, as were many “officially” recognized churches in the early colonies. As historian John Ferling noted in his recent history of the Revolutionary War titled Whirlwind, one of the biggest concerns of the colonists in the 1760s was that a Bishop of the Church of England would be appointed to a colonial diocese for the purpose of taxing the colonies to support the Anglican faith.

Given that much of the recent controversy and legal battles in the church-state arena have centered around the use of public funds for religious charities or schools, it is an unfortunate oversight that this topic was not addressed further.

The book closes with his discussion and analysis of how and why the myth of America's Christian roots evolved over the next 200 years. His argument focuses on the building of a common national identity and shared experience via the Founding Fathers, culminating in the notion of a “Divine Providence” that ensures America's growth and success.

Ultimately, although he makes a solid legal analysis of America's religious roots, including the desire for religious freedom and a “high wall” of separation between church and state, there seems to be an overemphasis on minimizing Christianity and not enough emphasis on the desire of the founders for religious liberty and freedom of conscience.

Clearly the colonists brought a lot of the same religious discrimination from England they were supposedly trying to escape, which he describes in some detail, and perhaps the ultimate triumph of the Constitution and Bill of Rights was not so much the separation of church and state as the freedom of individuals to seek God and spirituality as they see fit without government interference or persecution.

Although this book is not likely to settle this never-ending debate, it makes a definite contribution to understanding religious liberty, the role of the church in early colonial governments, and the thinking of our Founding Fathers on the role of religion and politics in the new nation they founded.